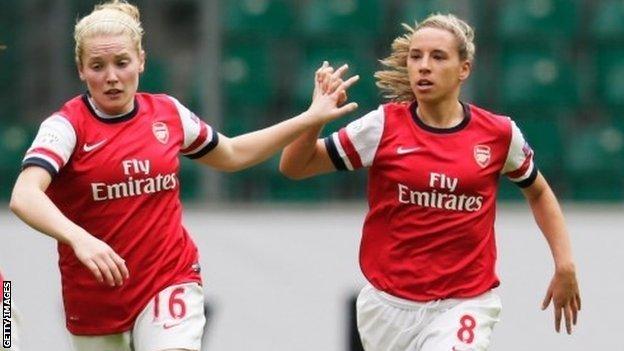 Arsenal thrashed Kazakh side CSHVSM-Kairat 11-1 to complete an 18-2 aggregate win and set up a Champions League meeting with Glasgow City.

The hosts were 4-0 up at half-time and netted seven in 31 second-half minutes.

Glasgow booked their place in the last 16 with a 3-1 victory over Standard Liege, 5-3 on aggregate.

Arsenal boss Shelley Kerr said: "Since the draw was made, everybody in Scotland seems to have been desperate for this game to happen.

This is as good a result as we've had in Europe

"Glasgow have proved what a good side they are for a long time now and I'm not surprised they've made it though to the last 16.

"It will be a tough tie for us, but we'll prepare for it as professionally as we would to face any team and we'll focus on ourselves.

"The fact that I'm Scottish is not an issue. My responsibility is to manage Arsenal and I'll be trying to manage them into the last eight."

Glasgow had been level at 2-2 with Liege after the first leg in Belgium and were in control from the start on their rain-drenched Petershill Park pitch.

Aline Zeler turned the ball into her own net under pressure from Suzanne Mulvey as the striker chased a pass from midfielder Denise O'Sullivan.

The Women's Scottish Premier League champions doubled their lead on the half-hour mark as O'Sullivan volleyed home a cross from Sarah Crilly.

Crilly bagged the third goal soon after half-time with a superb 18-yard drive that flew into the roof of the net.

The visitors got a consolation goal in stoppage time, Tessa Wullaert shooting home from left back Faustine Cartegnie's low cross.

Glasgow head coach Eddie Woleckie Black said: "This is as good a result as we've had in Europe.

"The pressure was on us here, but after criticising the team for some aspects of their play last week I couldn't fault them tonight.

"It took a lot of effort, but we've beaten a very good side and it was a thoroughly deserved win."