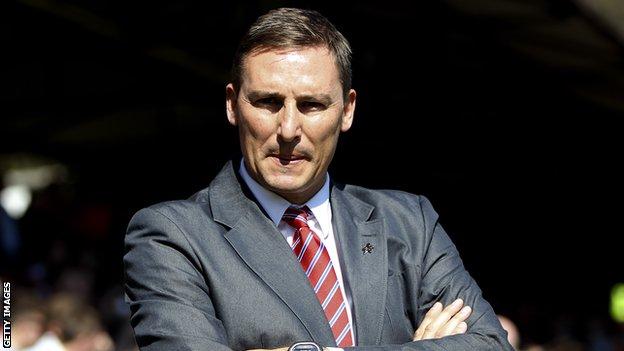 Aldershot boss Andy Scott says signing a new deal with the club gives him the stability to implement his ideas.

This week the 41-year-old and his assistant Terry Bullivant extended their contracts with the Conference Premier side until summer 2016.

"As a manager it is a precarious position in any club.

"To build your own squad and make them play the way you want them to play is something that doesn't happen very often," Scott told BBC Surrey.

"You don't often get time to build a squad and I have been able to bring in near enough every player I wanted to.

"Clearly there is a lot of work to be done on and off the pitch at the club but I want to be a part of it.

"We feel very comfortable here and feel we have a chance of having the time and backing to produce the kind of football we want to play here."

After starting the season with a 10-point deduction for entering administration, the Shots are currently just three points behind 20th-placed Dartford in the Conference Premier table.

And Scott is eager to play his part in trying to help the Hampshire club back into the Football League following their relegation from League Two last season.

"I want to manage at a higher level and hopefully we can do that here," he said.

"I've got to develop what we are doing here and if that goes quickly we can push up the league.

"First and foremost I want to stay in the league this year and then if we can look forward to the next couple of years and how we can build to try and challenge at the top end of the league."

Following Aldershot's turbulent summer and subsequent takeover by Shahid Azeem's consortium, Scott had to wait before signing his new deal.

Both he and Bullivant have accepted pay cuts to remain at the Electrical Services Stadium.

"We did our own things to make sure we got the position right for our relevant areas and then it was a case of sitting down and getting it sorted.

"There has been so much going on behind the scenes, the most important thing is for us to get results on the pitch. We have been doing well and people are seeing the style of football we want to play."