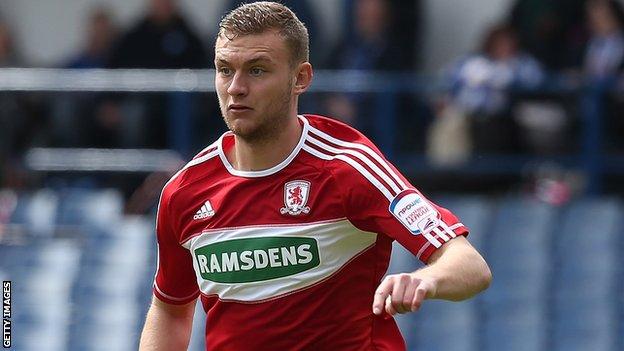 Before this season, the 20-year-old had only two Boro appearances to his name.

He spent most of last term on loan at Tranmere but has started the Teesiders' last three Championship matches.

"He's done well and playing against two big powerful boys in Chris O'Grady and Jason Scotland will be a test of how far he's come," Mowbray told BBC Tees.

"These last three games his performance level has been fantastic - I've been especially impressed by his concentration."

Gibson signed professional forms in 2009 and first played for his hometown club two-years later as a first-half substitute against Coventry City.

But it was another two years before he reappeared, again from the bench, in last season's final game.

"Of course there are big challenges ahead for him but the Barnsley front two might think 'right, we bully this young kid' and try to physically ask questions of him," Mowbray continued.

"[Centre-backs] Seb Hines and Jonny Woodgate are getting much closer to being fit and, hopefully, if Ben can keep playing as he has been then we might not need to bring anyone in."