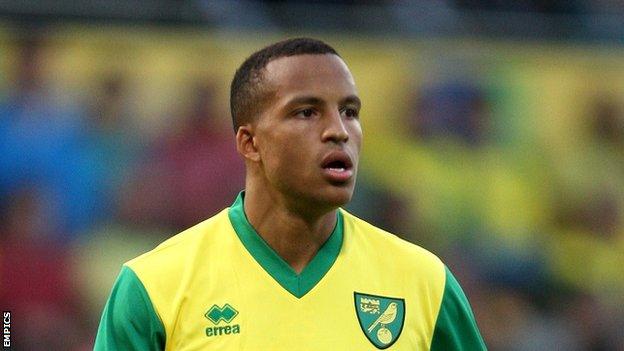 Martin Olsson believes patience is key if Norwich are to win at Premier League leaders Arsenal on Saturday.

Olsson was part of the Blackburn side which knocked the Gunners out of the FA Cup at the Emirates last season.

And he believes the Canaries, who lost 3-1 at home to Chelsea prior to the international break, can follow his former club in upsetting the odds.

Olsson told BBC Radio Norfolk: "You have to be patient, keep calm and hopefully catch them on the counter."

As a defender it's always going to be tough at the Emirates, but I was there last season with Blackburn and we won

The Swedish left-back, who scored in the 2-1 win over Austria which booked his country a World Cup play-off spot, insists no-one at Carrow Road is too concerned by the fact that, after seven games, they are third from bottom of the league.

"It's still the beginning of the season and we can't think about that too much, we just have to go out and play our games," he said.

"Everyone here is high on confidence, and most of the players love the pressure.

"As a defender it's always going to be tough at the Emirates, but I was there last season with Blackburn and we won. We sat back and defended well as a team and had our chance at the end."

Olsson, who was signed from Blackburn in the close season, has started the last two matches for Norwich after failing to dislodge Javier Garrido at the start of the season.

"I thought I did well in pre-season, and also for the national team, but I had been injured for four months before that and the gaffer said my chance would come," he said.

"It has and I am playing now and that's football: Garrido has been doing alright, but I have been doing well.

"I was at Blackburn for a long time, but I needed a change and I feel like the Premier League is my league. We've shown we can play and pick up points, that we have a strong squad."

Olsson admitted he is hoping not to face Arsenal playmaker Mesut Ozil after the German went off injured during his country's 5-3 win over Olsson's Sweden on Tuesday - though not before setting up one goal and scoring another.

"If he doesn't play that can only be good for us - but they have some very strong replacements," added Olsson.