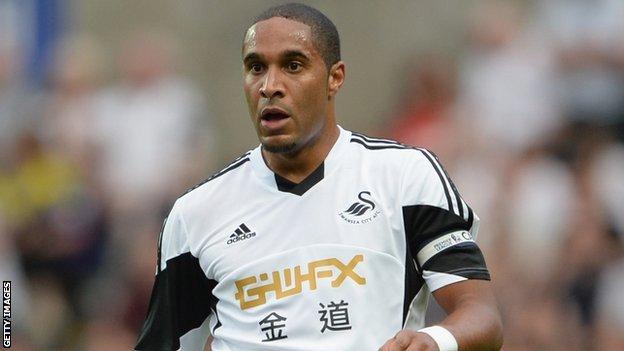 Swansea boss Michael Laudrup is hopeful Wales captain Ashley Williams will soon make his return from injury, but is not prepared to rush the defender back.

Williams, 29, has struggled with an ankle injury since September and missed Wales' recent World Cup qualifiers.

He will not face Sunderland in the Premier League on Saturday.

"With Ashley it's not a very serious one, but it's one if you're not careful it could be a little chronic… and we knew that already, weeks ago."

Williams has featured just once in Swansea's past six games and did not play in the national side's 1-0 win over Macedonia and 1-1 draw with Belgium.

Laudrup was pleased Williams was able to continue his recovery during the international break.

"They [Wales] completely agreed that he needed some time to get back 100%," Laudrup added.

"I will not force him to play because even if he is back training and no longer injured, to be fit to play 90 minutes is another thing, so he must come back when he feels ready to.

"I think he would like to play before we play Cardiff [on 3 November] and if everything goes well it could be on Thursday [against Kuban Krasnodar in the Europa League].

"But we won't risk anything and we've proven that already with him."

Williams' international team-mate Ben Davies also missed the two World Cup qualifiers because of a hamstring strain and is unlikely to be fit to face Sunderland.

But midfielder Jonathan de Guzman could return from a groin injury, while goalkeeper Michel Vorm and winger Pablo Hernandez are also fit.