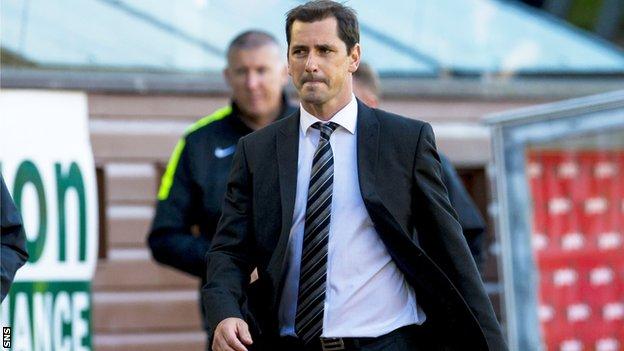 Dundee United boss Jackie McNamara has criticised the Scottish FA for not giving two of his players enough rest while on Under 19 international duty.

McNamara says John Souttar and Ryan Gauld now might not be fit to play against Aberdeen on Saturday.

The pair were in Belarus to help Scotland qualify for the Under 19 European Championships in 2014.

Scotland's qualification was only guaranteed with a 1-1 draw with Germany in their third and final group game.

Ricky Sbragia's side had already drawn 1-1 with Latvia and beaten Belarus 1-0.

Centre-back Souttar and midfielder Gauld, both 17-years-old, have featured heavily in United's first team this season.

"It's Thursday and I'm just waiting to see how Souttar and Gauld are," said McNamara, who intends to raise the matter with the SFA.

"Gauld picked up an injury in the second game, I believe, and was put on the bench in the third game.

"And for Souttar, he played in the Kilmarnock game and he's travelled all the way and played Thursday, Saturday and Tuesday.

"So I'm a bit disappointed that they played him in the three matches in such a short space of time, as well as the travelling to the other side of the world.

McNamara acknowledged that while on Scotland duty the players are at the disposal of the international coaching staff, but felt more communication would have helped.

"Sometimes you hear things about the relationships with managers," added McNamara. "That they speak to them and say 'we're going to do this' or 'we're playing this', but obviously not me and not Dundee United.

"No one's more happy than myself and the staff that the lads are away representing their country.

"It's a tournament, they had to qualify. I just feel that we should have been looked after better here, John [Souttar] especially. To be honest, at this moment I'm very worried about playing him again on Saturday.

"So we'll have to assess if he's fit enough and how his legs are."