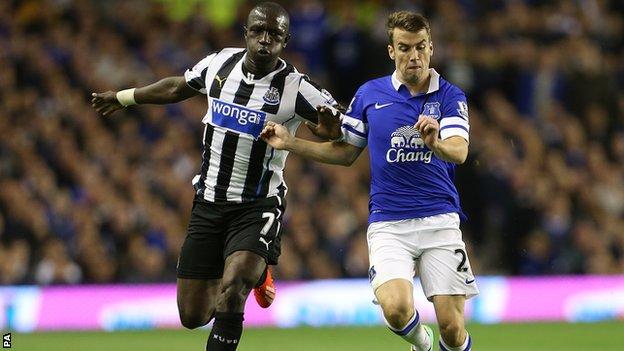 Newcastle midfielder Moussa Sissoko insists he is not worried about a goal drought stretching back eight months.

After arriving from Toulouse for an undisclosed fee, the Frenchman made an instant impact by scoring twice on his home debut against Chelsea in February.

But after netting in the next home league game, he has not scored since.

"This is not important for me. I am a midfielder and my job is to do a lot else to help the team, not just try and score goals," he told BBC Newcastle.

"I only care about Newcastle winning, not about whether I score. I have played on the right of midfield, more behind the striker and a little deeper this season already.

"I prefer to play really in the centre of midfield - I say it is a number eight."

The Magpies face Liverpool on Saturday, six months on from a 6-0 mauling at St James' Park.

Newcastle are currently 11th in the Premier League table and, after beating Cardiff 2-1 before the international break, manager Alan Pardew said he was "puzzled" by his side's unpredictability.

"We won the last game and played very well, just like against Aston Villa [in September's 2-1 win]. But then you look at the first halves against Manchester City and Everton - we were very, very bad," Sissoko added.

"All the players are in a good mind now, not like before that game against Liverpool. It's great to play the best teams that are near the top of the league and as long as everyone works hard together we will give Liverpool a good game."