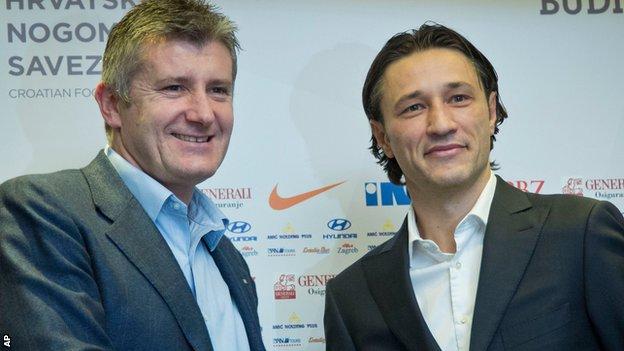 Niko Kovac has signed a three-year contract to become the permanent manager of Croatia.

Kovac, 42, had been placed in temporary charge following the sacking of Igor Stimac this week but will now manage the team until the Euro 2016 finals.

The former Under-21 coach will make his debut in next month's World Cup qualifying play-offs.

He said: "Our immediate task is to reassure the players they have the quality to get to the World Cup."

Croatia will play either France, Sweden, Romania or Iceland over two legs in November for a place at next summer's finals in Brazil.

And former Bayern Munich midfielder Kovac, who scored 14 goals in 83 caps for the national side, is confident of earning a place.

He said: "We have to make an objective assessment why we had a sharp dip in form in the home straight.

"They are all top players and the problem is in their heads, as they seem to have drifted and lost their focus when the going got tough."