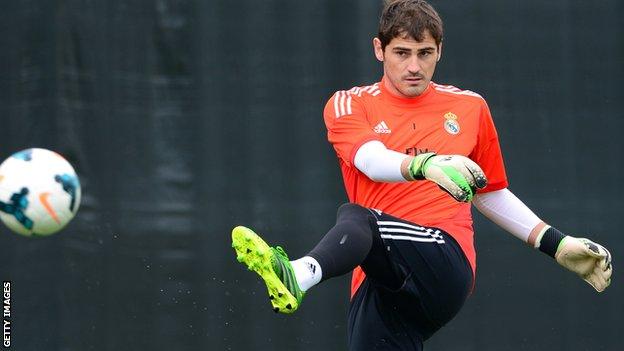 Real Madrid goalkeeper Iker Casillas says he may have to leave the club in the January transfer window.

Casillas, 32, has only played once for Real this season after losing his place to Diego Lopez when he sustained a broken hand last term.

"If the situation doesn't change within three months, I'd say that I'll be looking to leave," Casillas said.

"I have been here since I was a small boy but the day will come when maybe a decision will have to be made."

Casillas made his league debut in 1999 and has played more than 500 games for the club.

Jose Mourinho was jeered by Real fans last year when he left Casillas on the bench, but new manager Carlo Ancelotti has kept Lopez, 31, as his number one.

Casillas's only action this season has come in the Champions League, but he was picked for Spain's final World Cup qualifier against Georgia this week.

The goalkeeper said: "In September I wanted to leave and I was going to tell the president that I wanted to go, but I decided to be a part of this squad and this club for a lot longer.

"I have always wanted to stay at Real Madrid but I'd like to play and compete more. I will fight to get back into the starting 11."