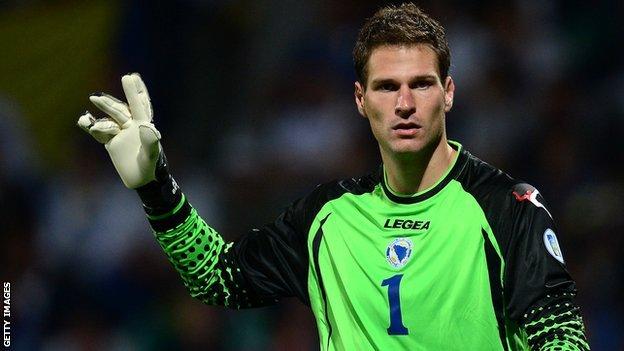 Stoke goalkeeper Asmir Begovic says Bosnia-Hercegovina can cause some "upsets" at next year's World Cup.

The 1-0 win over Lithuania on Tuesday saw the team finish top of Group G and qualify for the tournament for the first time as an independent nation.

"Bosnia will go to Brazil with nothing to lose," Begovic, 26, told BBC World Service.

"I'd love us to play England at the World Cup - it would be a great challenge for us and something to look forward to."

"We'll be one of the smallest nations. We'll go and enjoy the experience and try to cause a couple of upsets."

He added: "We don't want to just make up the numbers. We want to compete and see if we can achieve something and give more happiness to our people and our nation.

"We'll see what kind of group we get and hopefully we can put up a good show."

Begovic is one of two Premier League players in the Bosnia squad. Manchester City's Edin Dzeko finished as their top scorer in qualifying with 10 goals.

"We've got a really good team I have to say, a lot of players playing in good teams and good clubs," said Begovic.

"I'd love us to play England at the World Cup, it would be a great challenge for us and something to look forward to."

Bosnia played their first football match as an independent nation in 1992 during a war which killed more than 100,000 people.

"It's the best thing that's ever happened to the nation," said Begovic. "It's nice to have something good happen to Bosnia.

"After all the tough times in the past - and some things that are still going on now - it's really nice to give them that bit of joy and something to cherish and cheer."