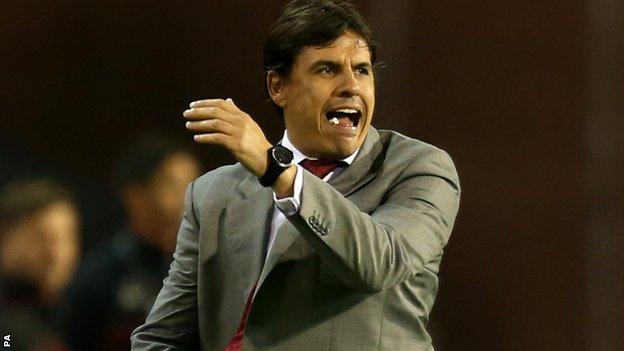 Former Wales manager Terry Yorath has called on current boss Chris Coleman to speak out if he wants to continue in the role.

Coleman has said he has not decided if he wants to carry on as manager after his contract expires in November.

But Yorath wants Coleman to make his feelings known before November's friendly against Finland.

"I think Chris should stay with the job and I think the Welsh FA should back him," he said.

Wales ended their World Cup qualifying campaign on a high with a 1-0 win over Macedonia and a 1-1 draw in Belgium.

The FAW has been in ongoing contract talks with the 43-year-old, who was appointed in January 2012 on a two-and-a-half-year contract following the death of Gary Speed.

Yorath was Coleman's club manager at Swansea City before he handed the defender his international debut against Austria in 1992.

"I've talked to Chris, I think three times in the last 10 days, and he sounds to me as if he's a bit unsure about his situation," Yorath added.

Dealing with the Welsh FA is, at the most, awkward because you've got people who think they know everything about football but don't know anything about it

"During my talks with him he was telling me certain things that were happening and I felt he was unsure whether he wanted to keep the job.

"I think if he wants to keep the job he has to come out and say that.

"It's the best job you'll ever have, managing your country, and he has to come out and say he wants to do it."

Yorath was Wales manager for five years and led the national side to the brink of the 1994 World Cup finals in the United States.

Following Wales' failure to qualify, Yorath's contract was not renewed by the FAW in December 1993.

And the former Leeds United midfielder has every sympathy for Coleman as he waits for clarity from the FAW about his future.

"Dealing with the Welsh FA is, at the most, awkward because you've got people who think they know everything about football but don't know anything about it," Yorath added.

"They don't understand the situation the manager's in.

"The manager's in a situation where two or three days before a game players pull out. You can't do anything about that. It's not like a club job.

"I think the last two games Chris has done ever so well. The game against Belgium I thought Wales played excellent.

"I honestly thought before the game Wales were going to get hammered and I probably wasn't the only one.

"But they played well, stuck it out and got a draw and a great result for Chris."