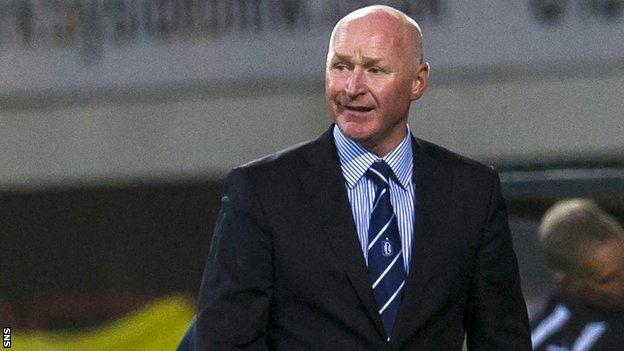 The club's shareholders approved a £650,000 investment from Texan group Keyes Capital in August.

"So we can get things done in the day rather than waiting weeks down the line. We know what we are doing."

Brown, whose side sit second in the Scottish Championship, has promised a bright future for the club in terms of of a new improved youth set up and facilities.

The former Rangers midfielder also says he will have money to strengthen the squad for a promotion push to the Scottish Premiership in the January window if he needs it.

I think if I need to get two or three players come January we'll definitely have the budget for that.

"We're spending money building the youth and getting the best local kids into Dens, so that we can try to promote them and get them on the park down the line and into the first team," said Brown.

"Money will be made available if we need it. We've got a squad here, but we've got a few injuries at the moment and the first team squad is a bit tight.

Brown also says this season's Championship will be the toughest league in the country.

"It'll be the hardest division in Scotland, because you've got the play-offs," he added.

"I reckon they're could be six to eight teams all vying right up to the last kick of the ball for the play off positions.