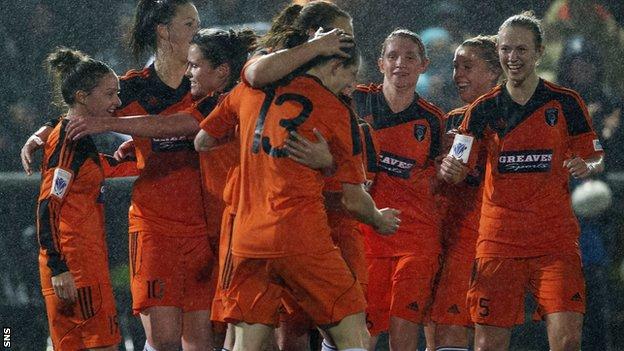 City beat Standard Liege 3-1 at Petershill to win the last 32 tie 5-3 on aggregate.

"Arsenal have a lot of quality, let's not kid ourselves on," he told BBC Radio Scotland.

"But I think we just relax and enjoy tonight rather than worry about what problems they're going to give us."

On a night like this it would be a wee bit unfair to single out any individual because it was a real team effort.

"It's pleasing we'll be meeting Arsenal. It's a pity it wasn't a bit later on, that's the only thing."

Glasgow took the lead through an Aline Zeler own goal before Denise O'Sullivan gave City a two-goal lead in the opening half-hour.

Right winger Sarah Crilly added a third midway through the second half, before Tessa Wullaert scored a consolation.

"We'd worked very hard in preparation in the last week so we knew the areas to capitalise on today," Wolecki Black added.

"We felt we could maybe use the pace down the sides to expose what we felt were weaknesses in the opposition team. They came up trumps tonight.

"On a night like this it would be a wee bit unfair to single out any individual because it was a real team effort.

"We've not been dependent on any one individual to get us goals so again tonight it's very pleasing to see the goals shared out."