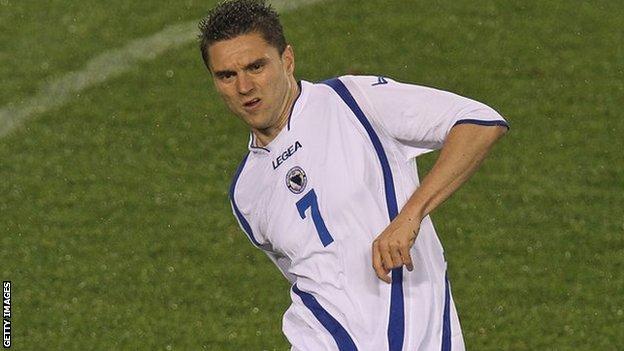 St Johnstone have extended Bosnia defender Sanel Jahic's trial after Steven Anderson was ruled out of action for longer than expected.

But it means that Scottish midfielder Martin Woods has been told that there are no funds to sign him.

Saints manager Tommy Wright said: "Sanel is still in and Martin has gone back.

"I would liked to have signed him, he was excellent when he was here, but my priorities are defensive cover."

I would have liked to have kept Martin. He's a quality player and has a couple of opportunities down south

The 27-year-old Woods, formerly of Leeds United, Sunderland and Rotherham United, has been without a club after leaving Doncaster Rovers in the summer.

Jahic, who has 31 caps for Bosnia, arrived last Thursday as he searches for a club following his summer exit from Karabukspor.

The 31-year-old, previously of Sochaux, Željezničar, Las Palmas, Mérida, Aris Thessaloniki and AEK Athens, moved from APOEL Nicosia to the Turkish top-flight club for £250,000 on a two-and-a-half-year contract in January 2012.

"We have Sanel in for another couple of days and we'll make a decision on that at the weekend," said Wright.

"I wouldn't have the funds to do both. Ideally, I would have liked to have kept Martin. He's a quality player, he came in for a few days and was really fit.

"I couldn't really keep him hanging on. He has a couple of opportunities down south and we wish him well.

"I have no doubt he'll get a club because he's an excellent player."

Wright's priority became a defender after an update to Anderson's attempted recovery from a dislocated thumb.

The centre-back is likely to be out until the turn of the year after being told the injury he suffered against Partick Thistle on 28 September will take time to heal.

"The surgeon saw him on Monday and he did say it would be a minimum of eight weeks to three months and he is now saying it looks more like it will be three months," added Wright.

"There is not a lot we can do about it. We are fortunate Gary Miller has come in and done well."

Meanwhile, St Johnstone have agreed a deal with Queen of the South to allow goalkeeper Zander Clark to leave on a short-term emergency loan deal.

Queens hope to register the 21-year-old ahead of Saturday's Scottish Championship game against Dundee.