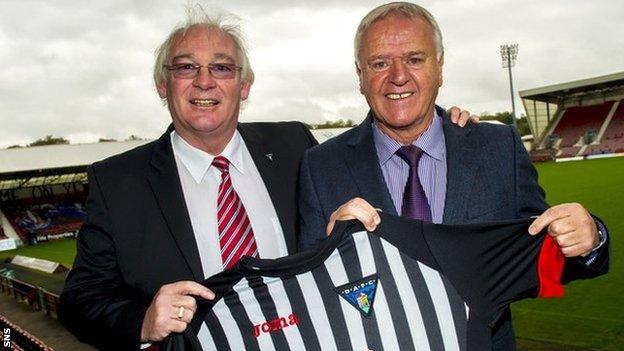 Pars United took over the Fife club this week and hope to soon take Dunfermline out of administration.

"Bryan has been looking after them as well as us and we are in good hands," said Hearts manager Locke.

"Hopefully, with a bit of luck, we can get the same result as Dunfermline before January."

Locke was especially pleased for his former manager, Jim Jefferies, who is now in charge at East End Park.

Jackson and his BDO colleagues, Trevor Birch and James Stephen, are now focusing their efforts on rescuing Hearts from their own administration crisis.

"I know I am speaking on behalf of everyone at Hearts when I say we're delighted to see Dunfermline come out of administration," said Locke.

"It's great that the fans have taken over and I'm delighted for the gaffer too. Now they can move forward as a football club"

BDO has been unable to progress its attempts to remove Hearts from administration while its remains in limbo waiting for liquidators to be appointed in Lithuania.

However, a hearing is now scheduled to take place on 24 October at Kaunas District Court, during which it is expected that bankruptcy administrators will be placed in control of the assets of the firm formerly controlled by Hearts owner Vladimir Romanov.

BDO was unable to negotiate with UBIG until administrators were appointed, but they can now set about trying to persuade the stricken company's administrators to hand over UBIG's 50% shareholding in Hearts.

That stake, as well as Ukio Bankas' 29.9% share and a floating charge held against Tynecastle, will be required if a successful company voluntary arrangement is to be struck with fans' group and .

"That was one thing that was holding everything up," said Locke. "I'm not the best man to talk about all the stuff that has been going on over in Lithuania, but Bryan and Trevor do keep us updated as much as they can.

"If the situation over there is going to be resolved then hopefully that is a positive step for the future of Heart of Midlothian."