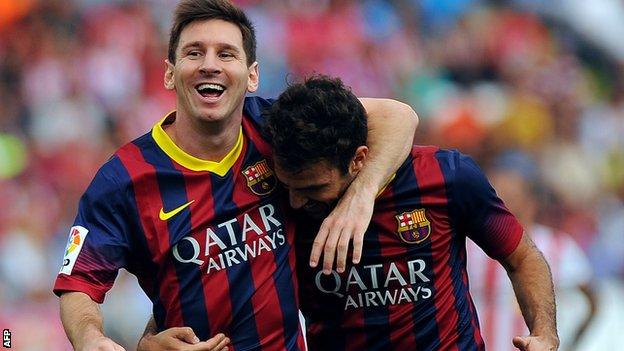 The 26-year-old has been missing since straining a muscle in his right thigh during the Catalans' 2-0 victory over Almeria on 28 September.

The World Player of the Year returns as Gerardo Martino's side aim to record a record ninth straight win since the start of the season.

Carles Puyol also returns after six months out with a knee injury.

The Barcelona captain had surgery on his right knee and is likely to line up in defence alongside Javier Mascherano, who is also returning from injury.

Young defender Marc Bartra, 22, has impressed at the heart of the defence in their absence.

Dani Alves, Alexis Sanchez and Gerard Pique have all been ruled out of the squad at a crucial time for Barcelona, who take on both Milan in the Champions League and Real Madrid in La Liga next week.

Messi missed his country's World Cup qualifiers against Peru and Uruguay - with Argentina having already qualified for Brazil - to stay in Barcelona and ensure a full recovery.

Barcelona sit top of the La Liga table, ahead of Atletico Madrid on goal difference, after both sides enjoyed a 100 % record from the first eight matches.

Atletico travel to Espanyol on Saturday (21:00 BST), after their Madrid rivals have entertained Malaga at the Bernebeu (15:00)

Carlo Ancelotti's men are five points behind in third place but hope to welcome back world-record signing Gareth Bale into the starting line-up.