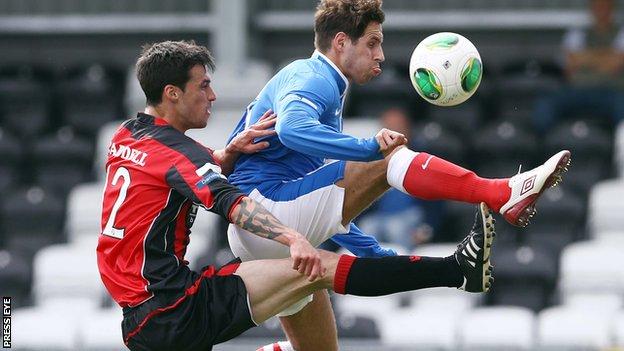 "Crusaders present a massive challenge - they have been playing some great stuff lately," said Jeffrey.

"We know how tough it's going to be and it will let us see how far we have progressed this season."

Michael is joined by former Linfield player Philip Mitchell while commentator Joel Taggart and Chris Morgan will take you through the action.

Linfield have climbed to the top after seven straight league victories while the Crues are unbeaten in 12 games.

Blues striker Peter Thompson is set to be out for the next three weeks with a hamstring injury while a similar problem has sidelined defender Mark Haughey.

"It won't be make or break but it is a very big game," said Crusaders manager Stephen Baxter.

"We're just glad to be in the early title race. In the first six games we didn't do as well as we could.

"Now we're pushing up the table and we are determined to build on that."

Portadown take on an injury-hit Ards at Clandeboye Park, with five players ruled out and doubts over Ryan Henderson and Andy Hunter.

Ballymena United make the trip to Dungannon Swifts with both sides missing players through suspensions.

Glentoran will be without central defenders Calum Birney (suspension) and Jay Magee (hamstring) for the visit of Coleraine, who could be without Ruairi Harkin (hip) and Shane Jennings (ankle).

Cliftonville keeper Conor Devlin returns from suspension as the champions prepare for a Solitude meeting with Warrenpoint Town.

Town boss Barry Gray is sweating on the fitness of Ruairi Devlin and Daniel Hughes, who both have ankle problems.