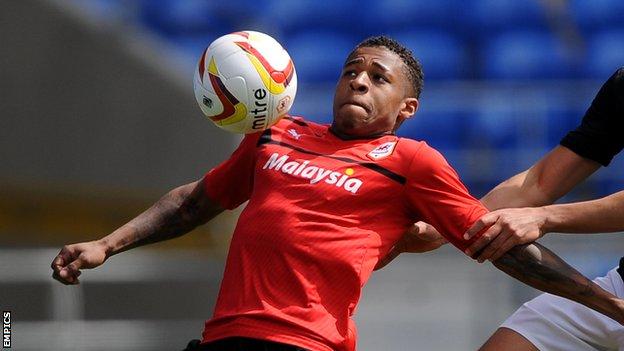 The 20-year-old, who has made one senior appearance since his move from Wycombe in January last year, has signed a deal until 5 January.

"We knew about Kadeem from when he was at Wycombe and he has developed during his time at Cardiff," Brentford manager Uwe Rosler told the club website.

He will give us pace, directness, dribbling ability and will terrorise defences

"He offers us something that I have been looking for since we lost Conor McAleny to injury."

The German added: "We need pace on the flanks. "He will give us pace, directness, dribbling ability and will terrorise defences.

"That is what we need to give us another option for our attacking game."

Harris came through the academy at Wycombe and made his League debut in December 2009, aged 16.

He turned pro in summer 2011, a few weeks after he was named League Two Apprentice of the Year at the Football League Awards.

He made 22 appearances in all competitions before he joined by Cardiff for an undisclosed fee in January 2012.

He has featured regularly for Cardiff's Under-21 side, with his sole first-team appearance coming in an FA Cup tie against Macclesfield Town.