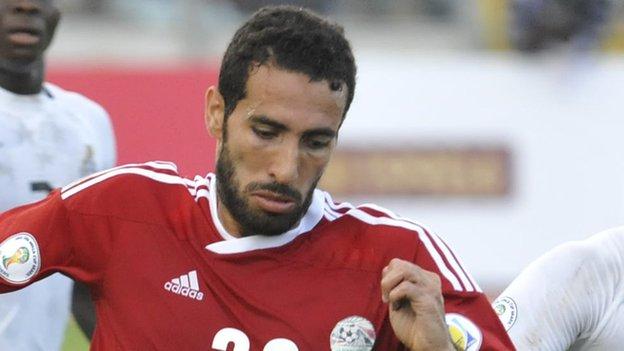 Al Ahly go into the second leg of their Champions League semi-final against Coton Sport this weekend facing a number of problems.

The Cairo club will have to cope with depressed stars, a suspended coach and an empty stadium.

What seemed like a routine assignment for the record seven-time African champions after they drew 1-1 in Cameroon two weeks ago has taken a dramatic negative turn this week.

Ahly supplied eight of the Egypt side humiliated 6-1 by Ghana in a World Cup play-off first leg on Tuesday, all but ending hopes of a place at the 2014 tournament in Brazil.

Realising his dream of competing at a World Cup had been dashed a final time, veteran midfielder Mohamed Aboutrika said he would retire when the Champions League campaign finishes.

And it would be no surprise if 38-year-old defensive marshal Wael Gomaa followed suit after being reduced to a helpless bystander as Ghana ran riot.

Goalkeeper Sherif Ekramy conceded four of the goals before retiring with a knee injury that could keep him out of the Coton fixture.

"Ahly have to be humble against Coton," he warned. "Nothing is impossible in football and the Cameroonians still have an opportunity to reach the final."

A former Ahly defender, Youssef must watch the match from the stand at the 12,000-seat El-Gouna Stadium in a Red Sea resort 450 kilometres north of Cairo.

He was banned from the touchline for one match after being shown a red card during the first leg in Garoua for showing dissent to the match officials.

A further blow to Ahly will be a lack of support as they serve the second half of a two-match crowd ban over fighting between their supporters.

With no rivals to vent their anger against before a group game, Ahly fans fought each other, forcing police to use tear gas before restoring order.

It was so different the last time Coton visited Egypt, losing 2-0 to Ahly in the first leg of the 2008 final before a capacity 73,000 Cairo Stadium crowd.

The central Africans hope six-goal leading scorer Alexis Kada can rediscover the finishing touch that has deserted him in recent outings.

And should they conquer Coton, Esperance may well be the final opponents again as they host Orlando Pirates having forced a 0-0 draw in South Africa.

"I expect to meet Ahly in the final once more," Esperance coach Maher Kanzari told a Tunisian radio station ahead of the second leg at Stade Olympique in a Tunis suburb.

But Pirates coach Roger de Sa countered: "A win at home would have been a better result, but my main priority was not to concede a goal.

"This enables us to take on Esperance with a fighting chance of reaching the final, given any goal we score counts double should the game be drawn."