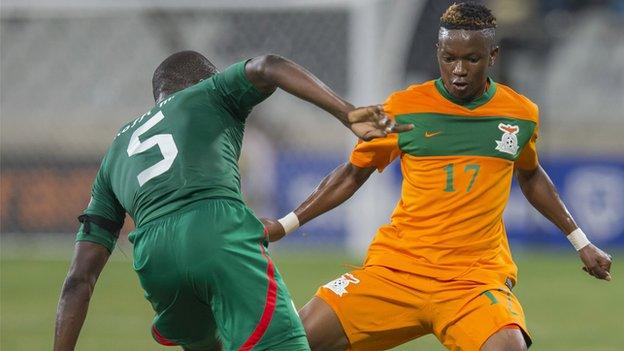 DR Congo playmaker Tresor Mputu scored the winner for the home side, who were without three key Zambian internationals, because of an ugly club versus country row.

Midfielders Rainford Kalaba and Nathan Sinkala and defender Stoppila Sunzu did not made it back from Zambia to Democratic Republic of Congo in time for the match after being turned back from the Zambian border by authorities on Friday.

The players missed a friendly international against Brazil in China in midweek amid claims and counter-claims about their fitness and whereabouts.

There is also a question over whether Mazembe broke Fifa rules around the release of players for international matches.

The trio are key figures in a Mazembe team, who will now hope to have them back for next month's final.

Kalaba and Mputu scored in Bamako two weeks ago as the visitors took a 2-1 lead over their opponents from Mali, with Morimakan Koita pulling one back for Stade.

The Congolese owe their success to a multi-national squad. Apart from the Zambians, coach Patrice Carteron can choose stars from Ghana, Mali and Tanzania.

Mbwana Samata, scorer of five Confederation Cup goals, is Tanzanian, and he was on target in a 7-0 DR Congo Super Cup drubbing of MK Kinshasa last weekend.

Mazembe will face Tunisia's CS Sfaxien in next months' final.

Sfaxien triumphed 1-0 in the second leg of the all-Tunisian clash against CA Bizerte . The first leg had ended 0-0.

They had been forced to move Sunday's return match from Sfax to Tunis because of the condition of their home ground, described by coach Ruud Krol as a "sand pit".

Sfaxien still emerged victorious, with the decisive goal coming from Idrissa Kouyate in the 43rd minute.