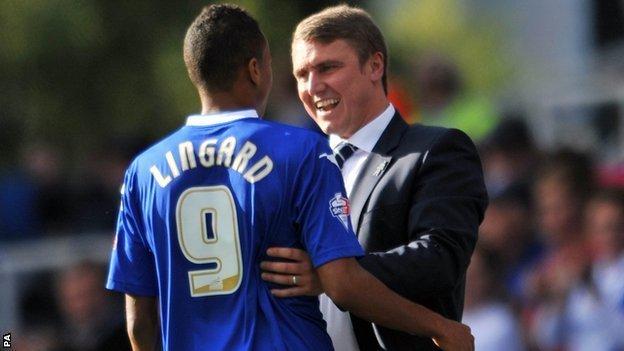 The 20-year-old's initial youth loan was due to expire this Sunday following the Blues' trip to Leeds United.

But a new agreement is in place to keep him at St Andrew's until 14 December, making him available for a possible further eight Championship games.

The former Manchester United, Charlton Athletic and West Ham United player looks unlikely to be back before the New Year after picking up a thigh injury in training, which may prove to be a recurrence of the problem that finished his season in March 2012.

"The initial diagnosis is that it is the same part of the thigh he injured before I got here, just before the play-offs two seasons ago.

"If it is a repeat of that injury, you're looking at a minimum of two months out, possibly three.

"It's a blow, as he's been very consistent for us, whether at centre-half, wing-back, full-back or in midfield. You're losing not just one player but three or four, because of his versatility".

On the plus side, Blues, 19th in the Championship, have use of the highly-rated Lingard for another two months.

Prior to Lingard's arrival in September, City had managed just four goals in seven matches this season - and one of them was an own goal.

But, sparked by Lingard's stunning four-goal debut against Sheffield Wednesday in September, Clark's side have now hit 12 in the last five matches.

That includes the 3-1 win without Lingard in the Capital One Cup to put out holders Swansea City.

But the England Under-21 international has so far made four appearances, taking his City tally to five goals with another strike in the 4-0 win over Millwall.

"He's back from international duty," added Clark. "And we've now got him signed up until 14 December.

"There was competition again from other clubs, but we can now breathe a sigh of relief and concentrate on football and getting a few more top performances out of him."