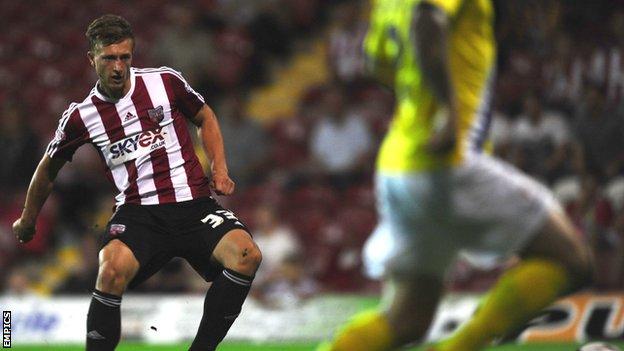 The 20-year-old has scored one goal, against AFC Wimbledon in the Johnstone's Paint Trophy, in four games for the Bees this season.

Manager Aidy Boothroyd said: "Luke is a centre forward who is strong and quick and we have watched him for a while.

"He is one of those players on our under 21 list who we have done our homework on. "With our injuries at the moment we need to add up front."

Norris will link up with another Brentford player at loan at Sixfields, Stuart Dallas, who scored on his debut at AFC Wimbledon.

The Cobblers are currently without strikers Clive Platt (calf) and Alex Nicholls (leg) and former loanee Jacob Blyth had to return to parent club Leicester City with an injury.

Roy O'Donovan is also a doubt for the home match against Dagenham & Redbridge with an ankle problem.

Norris is Northampton's 15th signing since the play-off final defeat to Bradford last season, and Boothroyd told a fans' forum on Thursday that he was still targeting a "proven goalscorer" as well.