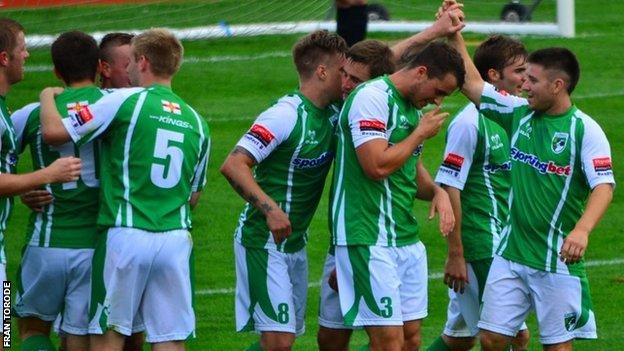 Guernsey FC's Ross Allen says bringing FA Trophy football to the island for the first time is an opportunity for the club to show they "mean business".

Saturday's clash with Billericay Town will be the first chance Guernsey fans have had to watch FA Trophy action.

"It's a big and important trophy for semi-pro and professional Conference sides," Allen told BBC Guernsey.

"It's a chance to show the rest of the UK that we're not just a little team - that we're here and mean business."

The Green Lions were drawn at home against Dover Athletic, but a fixture clash with Guernsey RFC - with whom they share their Footes Lane ground - caused problems.

Dover refused to play the game on an alternative date, meaning the tie ended up being switched to the headquarters of the Sussex County Football Association at Lancing. Guernsey went on to lose the game 3-2.

Allen added: "We're excited - obviously there was a lot of disappointment over the FA Cup but thankfully we've got this game at home - it's a good one for the crowd and I think the fans are really excited.

"We know they'll be tough, they're the league above and doing well.

"They'll be a good footballing side but sometimes that plays into our hands. I think it's a great chance for us to put on a good performance and show where we want to get to for the future."