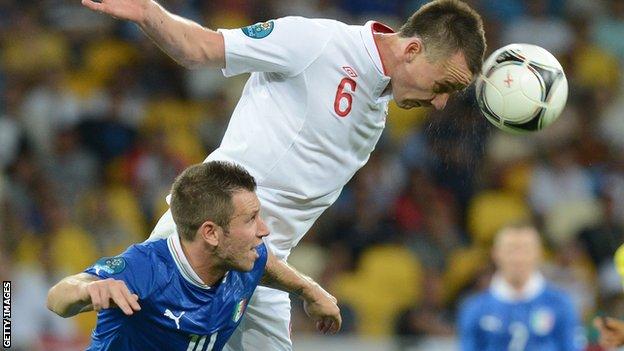 Chelsea manager Jose Mourinho believes John Terry may have been too hasty by announcing his England retirement.

The 32-year-old defender won 78 caps but quit in September 2012 after a racism row involving Anton Ferdinand.

Mourinho believes his captain could still do a job for his country after "recovering his self-esteem".

"If I was a football player I would wait for the national team to say we don't need you any more," said Mourinho.

"That is just my personal feeling. For sure he has reasons that push him for that decision."

Terry was cleared at Westminster Magistrates' Court of racially abusing Anton Ferdinand during a Premier League game in October 2011, but said his position in the national team became "untenable" when the Football Association pursued charges against him.

Terry's final appearance for the Three Lions was the 5-0 World Cup qualifying win away to Moldova 13 months ago.

He made just 11 Premier League starts last season but has been involved in all seven top-flight games since Mourinho returned to Stamford Bridge in the summer.

"He is recovering his self-esteem, recovering the feeling of being an important player for the team which he lost," Mourinho added.

"The reasons that pushed him to international retirement are out of my control."

England manager Roy Hodgson was asked this week whether Terry or Manchester United defender Rio Ferdinand could force their way back into his World Cup plans.

"I like John Terry, he did a fantastic job for me at the Euros," Hodgson told BBC Radio 5 live.

"But it's not the moment to start resurrecting that."