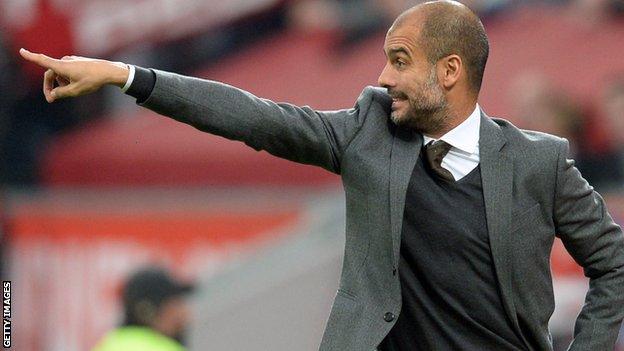 Bayern Munich boss Pep Guardiola says his players must accept his decisions if the German side are to retain their Bundesliga title this season.

Bayern, who also won the German Cup and Champions League last term, are aiming for their 34th German top-flight match without defeat on Saturday.

They host Mainz at the Allianz Arena.

"We will only fight for the (league) title at the end of the season if every player accepts my decisions - otherwise we will have problems," said Guardiola.

"I support those who accept them, but those who don't want to understand them will often find themselves sitting in the stands."

Unbeaten leaders Bayern are one point clear of second-placed Borussia Dortmund having won six of their opening eight fixtures.

If they manage to avoid defeat against Mainz, the Bavarians are two matches away from equalling Hamburg's league record of 36 games without defeat which was set in January 1983.

Their arch-rivals Dortmund have a number of injury concerns for their home clash against Hannover on Saturday.

But coach Jurgen Klopp insists he will not rest players ahead of Tuesday's Champions League visit to Arsenal.

Full-back Marcel Schmelzer and midfielder Marco Reus are doubts after withdrawing from international duty with Germany, while Turkey midfielder Nuri Sahin could also miss out.

"I'll group my troops together on Friday and then I should know who can play, and you'll find out on Saturday," Klopp told a news conference.