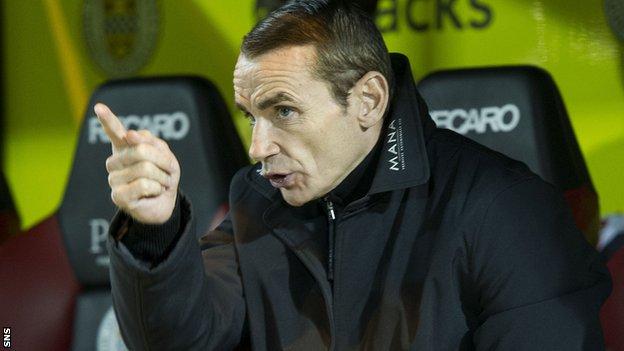 Manager Danny Lennon has apologised for comments he made before St Mirren beat Hearts 2-0 in the Scottish Premiership earlier this month.

He claimed that journalists expected his team to "crumble" in the face of a rejuvenated Jambos side.

"It's wrong of me to try and get inside anybody's head and and work out what they are going to write," said Lennon.

"For anybody who was offended by my presumption, then I sincerely apologise."

The people who continue to write us off should continue to do so, because it seems to be working for us right now

If St Mirren had lost that encounter at Tynecastle, Hearts - deducted 15 points for going into administration - would have closed the gap on the Paisley side to just six points.

But goals from John McGinn and Paul McGowan secured Saints' first win of the campaign and eased the pressure on Lennon.

He added: "I've been married for 18 years and I still can't get into my wife's head so it's wrong of me to try and get inside a journalist's head and try to affect what angle he is going to write his story on.

"But the people who continue to write us off should continue to do so, because it seems to be working for us right now."

The Buddies, having leapfrogged Kilmarnock into 10th place, looking to make it two wins on the trot.

"We've made some small steps but there is a lot of work still to be done," Lennon added.

"It's great to see the boys with a smile on their faces because I think they get fed up with the media attention and what is written about them, the negativity. Professional pride hurts.

"If you look at where St Johnstone finished last season - third position - after a very poor start, that can be our inspiration."