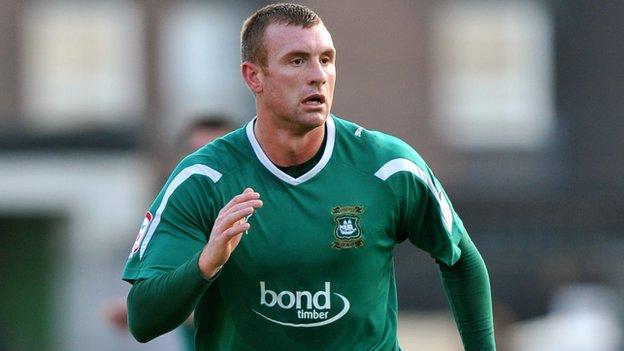 The ex-Coventry youngster, 25, who played 11 times for Tamworth in 2008-09, has spent the last 18 months with the Royal Marines out in Afghanistan.

All three are in line to figure against Luton Town at The Lamb on Saturday.

Right-back Higgins, 19, has been signed on a one-month youth loan deal, tying him to the club until 13 November.

The Liverpool-born former Everton trainee, who has also been given permission to represent Tamworth in the FA Cup, is the sixth Blues youngster to be sent out to lower league opposition in recent weeks to gain first-team experience.

As for Chadwick, the much-travelled 30-year-old striker has joined Tamworth until 1 January.

He has also played for Derby County, Millwall, Hereford United, Shrewsbury Town, Chester City, Barrow and Stockport County, as well as two spells with Argyle, since starting his career promisingly at Everton 11 seasons ago.

"Chaddy is an experienced player and it's only right that he should be playing," said Plymouth boss John Sheridan.

"I've been honest with him all along that, if he could get a club that would suit him and would enable him to go and get some football, then I wouldn't stand in his way.

"Even though Tamworth are in the Conference, it's a very tough league now."

Belford's struggling side currently stand 19th in the Conference Premier, having picked up just one point from their last two games.