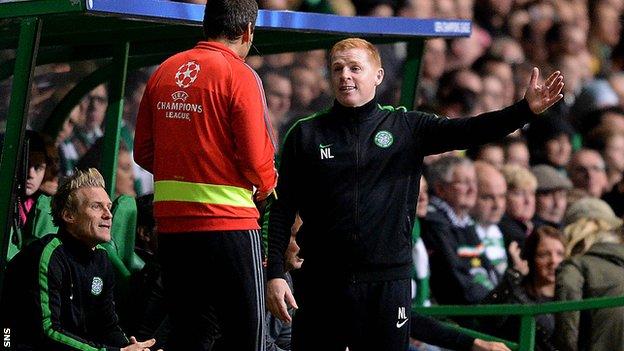 Brown was dismissed after appearing to aim a kick at Barca forward Neymar.

The club are appealing against the three-game European ban issued by Uefa to Brown and Lennon said: "He's instinctively reacted.

"It's petulance more than anything else. I don't think it was violent. He's been punished very heavily for it and we're going to fight his corner."

He was having a very good game up until his moment of, I don't know what you'd call it, he just had a blip

The ban would make the 28-year-old unavailable for both games against Ajax and the visit of AC Milan.

Brown would then be available for the final Group H fixture against Barcelona at the Nou Camp.

"He's a huge player for us and he's been very influential," Lennon told BBC Radio 5live.

"He was having a very good game up until his moment of, I don't know what you'd call it, he just had a blip."

Celtic are bottom of the group having lost their opening two matches, while Ajax have one point going into their trip to Glasgow on Tuesday.

Following the 1-0 home loss to Barca,

Meanwhile, Lennon has played down any suggestion that he will leave Celtic Park to manage in England in the near future.

"Everyone has ambitions but I'm at a great club," he said.

"To leave here would be giving up a lot, trust me. Huge fan base, an opportunity to play Champions League football every year and that gives you a great thrill and challenge.

"Nothing lasts forever but I want longevity in the job and that's the hardest thing to get. The one predictable thing about the job is that you'll end up getting the sack at some stage.

"But I can't be blasé about it and say 'I want to go here and I want to go there'. I want to keep knuckling down and keep trying to progress myself and the club in the right way."