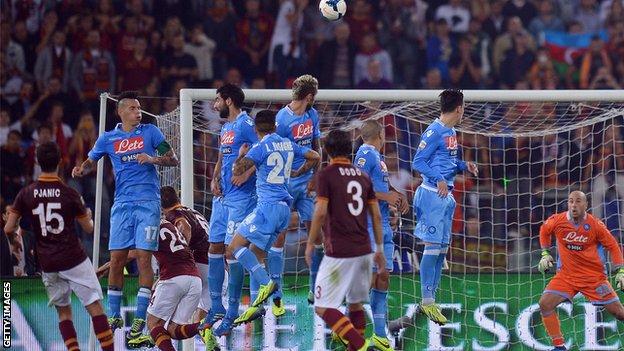 Roma midfielder Miralem Pjanic scored in each half as the Serie A leaders secured a 2-0 home win against second-placed Napoli at the Stadio Olimpico.

The Giallorossi extended their 100% winning start to an eighth game as they moved five points clear of Rafael Benitez's previously unbeaten team.

Pjanic curled in a 20-yard free-kick in first-half injury-time, before drilling a 71st-minute penalty past Pepe Reina.

Top of Serie A

Napoli substitute Paolo Cannavaro was sent off after conceding the penalty.

The 32-year-old defender, who replaced the injured Miguel Britos in the 44th minute, was booked seconds after his introduction for conceding the free-kick which led to Bosnia international Pjanic's first.

The opening goal came after Roma midfielder Daniele De Rossi had cleared Napoli striker Goran Pandev's shot off the line and Pandev's team-mate Lorenzo Insigne struck the outside of the Roma post.

Benitez's side started strongly after the break and hit the woodwork twice more through Gokhan Inler and Marek Hamsik.

But Roma, who have only conceded one Serie A goal this season under new boss Rudi Garcia, doubled their lead after Cannavaro dragged down Marco Borriello.