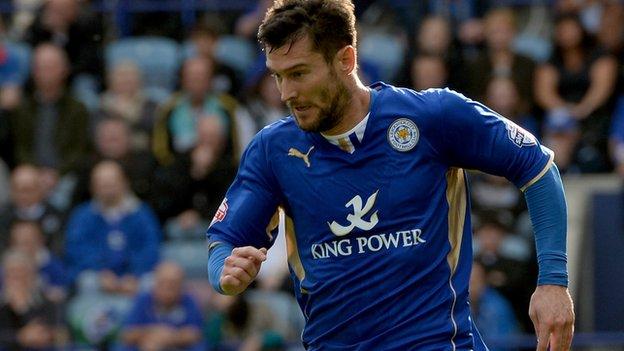 Leicester moved up to second in the Championship with a victory over Bournemouth at the King Power stadium.

David Nugent put the home side ahead when he gathered Lloyd Dyer's pass and produced a clinical finish.

The visitors' cause was not helped when Elliott Ward fouled Danny Drinkwater and was sent off for two yellow cards.

The result helped Leicester continue their impressive start to the season and the three points provided them with their sixth successive home league win.

Nugent's finishing prowess gave the Foxes the lead when he collected Lloyd Dyer's pass and scored his eighth goal of the season.

Pugh gave Leicester keeper Kasper Schmeichel little chance as he equalised before the Foxes suffered a blow when Nugent limped off early in the second half.

However, Vardy - after having a penalty appeal turned down - raced on to a pass by Chris Wood to score the eventual winner.

Ward's dismissal made matters worse for the visitors and Leicester went on to secure their ninth win of the season.

"I think we deserved to win. It was a decent performance against a good side who didn't surprise us. They set themselves up in a similar fashion as they played against Forest.

"They are a very decent side so for us to come out on top shows that we continue to progress. I thought they came with a positive intent and started the game well.

"I don't think it was a case of them sitting back because they are comfortable in possession and when they have the ball they use it pretty well.

"But I was really pleased with how we went about the game as well. We always looked dangerous in wide areas and have strikers who have good energy levels."

"I thought in the first half we were well in the game and had some really nice passages of play and a couple of good opportunities where we didn't really work the goalkeeper.

"We conceded a goal and showed good character to not let that affect us and scored a great goal ourselves.

"At half-time you think it could go either way, but in the second half I don't think we quite hit the level we did in the first half and it was backs to the wall.

"We were coping okay but conceded a poor goal and the sending off changes the game from our perspective. It was very difficult to build any pressure."