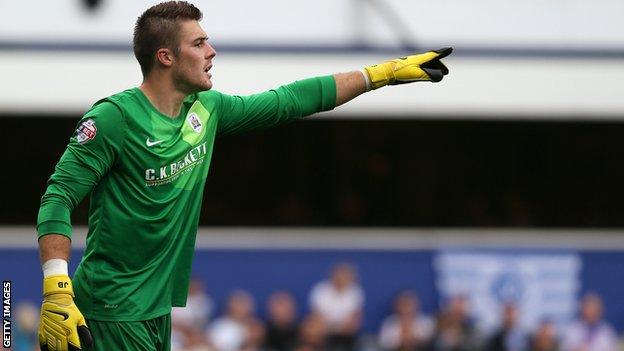 Barnsley and Sheffield Wednesday missed the opportunity to move out of the Championship relegation zone as they shared an entertaining draw at Oakwell.

Having already struck the post, Marcus Pedersen put Barnsley ahead with a powerful 16th-minute volley.

David Perkins should have added a second for the home side after half-time, but fired his shot over the bar.

Owls substitute Atdhe Nuhiu forced a fine save from Jack Butland before Matty Fryatt equalised with a volley.

Wednesday, who remain winless after their eighth draw in 12 Championship games, recently confirmed the signing of Nigerian free agent Seyi Olofinjana and the former Hull midfielder went straight into the starting line-up.

Bad starts for both sides

The Tykes were the brighter side early on in this South Yorkshire derby, but it was the visitors who carved out the first clear-cut chance. Captain Reda Johnson floated a ball into the box after good work on the wing, but Roger Johnson could only hit the side netting with his header.

Tom Kennedy struck a free-kick narrowly over the bar and it was the hosts who broke the deadlock soon after.

Reda Johnson was dispossessed deep in his own half before Pedersen advanced on goal and struck the post. The striker found the ball at his feet again and this time made no mistake, thundering the ball past Chris Kirkland.

Wednesday grew into the game after going behind but were unable to test Butland, finding themselves up against a resolute and determined Barnsley defence.

But David Flitcroft's men came out fighting after the interval, and almost doubled their advantage as Perkins raced through on goal but could not find the target with his shot.

They were lucky not to concede a penalty when defender Jean-Yves M'voto's handball in the box was not spotted by referee Robert Madley.

Owls boss Dave Jones sent on Nuhiu who almost made an immediate impact as his deflected shot was pushed away by Butland, but the keeper - on loan from Stoke City - could do nothing about Fryatt's thumping strike from the edge of the area.

The Owls could have gone ahead as Butland saved smartly from Michail Antonio's close-range effort and Nuhiu nodded a header wide, but ultimately neither side could find a winner.

"We are growing into the season, I am pleased we are getting better and finding some momentum. It's about grinding in and digging results but having the bigger picture to develop a team.

"We did the game plan and it completely worked, the moment we have not focused allowed Sheffield Wednesday to get in.

"I was desperate for a clean sheet and it's disappointing - the quality of Pedersen's goal should win the football match."

"We didn't get going until the second half and once we got going we were the better team to go on and win it but unfortunately we didn't.

"Don't ask me why we didn't start well, we couldn't play it out because they were pressing us and when we did try playing it out we conceded. I think in the second half the changes sorted it out and we created chances.

"We are going to try [and extend the loan deal of Fryatt], it's down to the chairman and the finances and it's difficult. Matty scored a great goal, he had a chance like that in his first game and missed it, so that just shows what games can do. We'll wait and see what happens."