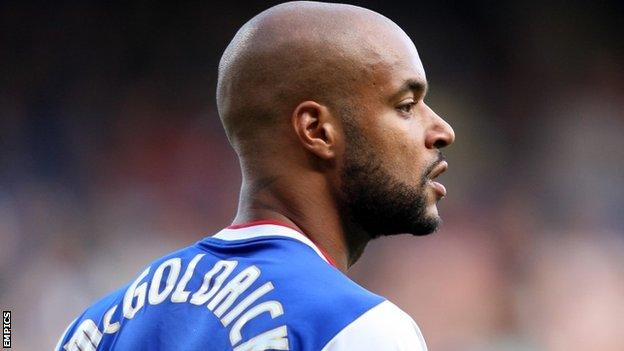 Bolton are still looking for their first home league win of the season after David McGoldrick's equaliser rescued a point for visitors Ipswich.

The Trotters broke the deadlock when Medo Kamara's free-kick beat the dive of goalkeeper Dean Gerken midway into the second half.

But they held the lead for only eight minutes before McGoldrick drilled in from just outside the area.

The draw leaves Bolton 21st in the Championship while Ipswich are 13th.

Both sides created a handful of opportunities in the first half.

At the other end, Ryan Tunnicliffe, on loan from Manchester United, had his shot blocked by Andy Lonergan, following a good move involving Luke Hyam and McGoldrick.

Beckford had another chance when former Liverpool player David Ngog pulled the ball back for him but he fired wide.

The hosts also created the first opportunity of the second half when South Korea's Chung-Yong Lee fired in a long-range strike that was tipped over by Gerken.

They finally made the breakthrough when Kamara found the net after Beckford had been fouled by Christophe Berra on the edge of the area.

But Town were level moments later. Cole Skuse's shot was blocked but the ball fell to McGoldrick, who rifled in from outside the box.

The goalscorer had another chance soon after the restart but failed to get enough power on his effort.

"Football fans pay good money these days and I've asked the fans to get behind the team and they have done throughout the game. I think that we've got to live with the pressure, I felt that it was a very hard game and we were very dogged today.

"But we let ourselves down conceding after we went ahead and that was our downfall again today. I was disappointed with that after we looked quite strong and determined to win the game.

"I thought that Medo in particular did really well. Medo's passing range was very good today and he isn't renowned for his free-kicks, but after that one he told me that he needs to be taking more."

"I'm delighted with a point because that is probably our worst performance away from home this season. The game was not particularly good. I described it as awful, dour and dire in different interviews and that's probably what it was.

"It was a great strike from David McGoldrick. I said to him at half-time that it wasn't his day today because he didn't play particularly well.

"Their strikers were a handful so I'm happy with our back four and how they played as well."