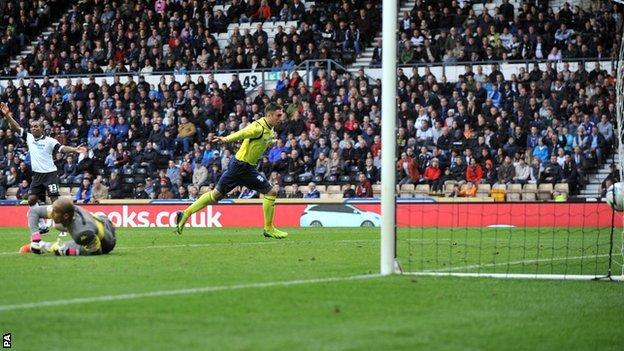 The Rams survived a Nikola Zigic header hitting the crossbar before they took the lead when Jamie Ward slotted in after Chris Martin's effort was parried by goalkeeper Darren Randolph.

Derby appeared in control but Novak volleyed in at the far post to level.

Birmingham ended a run of five away defeats in the Championship with the draw against Derby.

Conor Sammon had two late chances for the home side but he shot wide and headed over as Birmingham held on.

The point restored some pride for the Blues after last weekend's 4-0 thrashing by Leeds.

Derby started strongly and Ward had a shot saved by Randolph, while Craig Bryson lifted an effort over the Blues keeper only for Dan Burn to clear off the line.

The Rams survived a scare when Zigic's header from a Shane Ferguson corner came back off the woodwork before Ward pounced to put them in front.

Derby appeared to be in control but Paul Caddis found substitute Novak, who provided an emphatic finish to equalise and earn Blues a draw.

"We came across a very dogged and resolute Birmingham team who were smarting from last week and we knew it was going to be difficult.

"I knew it was a game that was all about the first goal and once we got it, I thought we would go on and win but they hung on in there, we created and missed chances but that's football, last week we took them, this time we didn't and that's why it's a frustrating result.

"I am pleased with the performance but I think we lost concentration for the goal. I say we should win those games and score more goals after going 1-0 up but it's early days and it's a case of learning about the team."

"If you ask my wife and kids, they hate seeing their husband and dad with a miserable face so turning 41 tomorrow, I will be sitting around the dining table and they will see their dad smiling for the first time in a while so hopefully there will be some photographs taken.

"I was angry last week, we were hurting but we helped pick each other up during a tough week. We didn't take a day off and worked extremely hard and with each day the sombre mood changed to good spirit and by the end of the week we had smiles on our faces again.

"The players have showed a great maturity for their young age so I was delighted that they have got a reward today. It's the first time this season we have gone a goal behind and have come back to get a positive result so that's an important factor."