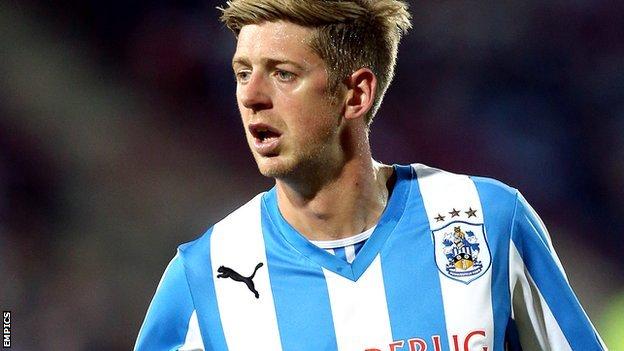 Matt Smith headed the visitors into an early lead before Danny Ward equalised soon after with a fierce strike.

Tom Lees diverted Adam Hammill's cross into his own net to give Huddersfield the lead but Dexter Blackstock headed in an equaliser on his debut.

However, Huddersfield-born Stead sealed victory for the home side with a low finish late on.

Victory for Huddersfield was their fifth in eight league matches against Leeds. It was also their second in a row, and first at home in four years.

Victory moved Huddersfield back into the top half of the table, level on 17 points with Leeds.

The same fixture last season saw fans treated to six goals as Leeds claimed derby honours with a 4-2 win. This encounter promised a similar level of entertainment after both sides scored in the opening 10 minutes.

Smith towered over defender Joel Lynch in the second minute to head in from Alex Mowatt's corner before Huddersfield swiftly replied as Ward rifled a venomous shot into the back of the net after being picked out by Hammill's corner.

After having withstood plenty of pressure in the early stages, Huddersfield were boosted by their equaliser.

But Leeds should have retaken the lead on the hour when a nicely-worked move by the visitors ended with Luke Murphy sidefooting wide from inside the area when unmarked.

It was to prove a costly miss as Huddersfield took the lead soon after when Hammill's ball into the area was flicked into his own net by Lees.

Leeds manager Brian McDermott responded by bringing on new signing Blackstock and his impact was immediate, the on-loan Nottingham Forest player flicking a header into the net from a free kick with his first touch.

But just as the Leeds fans had finished celebrating that goal, Huddersfield snatched what proved to be the winner.

Substitute Sean Scannell twisted his way past his marker before finding Stead inside the area and the striker, who came through the youth ranks at Huddersfield before leaving for Blackburn in 2004, swept the ball home for his first goal since re-joining the club in the summer.

"I am pleased with that result. Performances are important but today the result was important. It was great for everybody because this club probably lived in the shadows of Leeds for a long time.

"It is a one-off game and I thought the spirit was fantastic, the togetherness of the players and supporters was brilliant.

"When the ball was there to be won, more often than not we won it but it was one of those games where your heart is in your mouth because it could have gone either way."

"We didn't defend goals properly. We created a lot of chances but we have to learn how to manage games right away from home.

"Whatever happens you have to make sure you do the right things defensively.