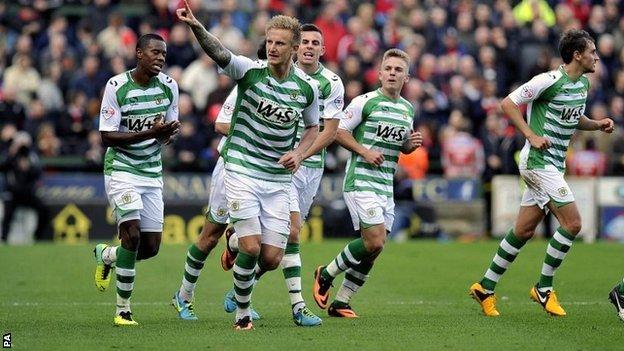 Yeovil Town produced a shock win over Nottingham Forest to move off the bottom of the Championship.

Upson added another from 25 yards and although Chelsea loanee Nathaniel Chalobah headed in, Yeovil made it 3-1 through Byron Webster's header.

The Glovers held on for a first home win of the season and ended Forest's run of seven games without defeat.

On-loan Wolves goalkeeper Hennessey extended his stay at Yeovil earlier this week and was in inspired form to thwart Billy Davies's side, who slip to sixth in the table.

And, at the other end, Yeovil finally rediscovered their goalscoring touch after registering just one home league goal before the visit of Forest.

Upson's volley was deflected past Forest goalkeeper Karl Darlow to double their league tally for the season but celebrations were muted when referee Mick Russell became the fourth official in the last five matches to award a penalty to the Huish Park visitors.

Cox, who was brought down by defender Shane Duffy, picked himself up to take the spot-kick - but saw his tame strike saved by Hennessey, before a goalmouth scramble saw the goalkeeper claw a second effort away and Webster head the ball off the line.

And Forest were made to pay as Upson scored five minutes before the break before Webster headed in three minutes later.

In between those goals Chalobah, 18, grabbed his first Forest goal after Jack Hobbs steered Majewski's free-kick into his path.

After a lacklustre first half, Forest improved in the second period but Hennessey denied Cox, substitute Jamie Mackie and then Darius Henderson.

"It was a fantastic result as Nottingham Forest are Premiers League in the waiting. We're new to this level, but the boys have been unlucky in a few games and I keep saying we're good enough to compete with these teams.

"Hopefully this will push us on for the next few games. It was a great first half attacking display, and then a great defensive display in the second half.

"The lads have never lost the faith and I think we've been unlucky, beaten by the odd goal a couple of times and a couple of decisions have cost us points."

"I was surprised that was Yeovil's first home win because in the first 45 minutes their appetite was good, their attitude was good and we quite simply didn't turn up.

"Having said that, at 1-0 you can't afford to miss penalties and that was without doubt a big turning point.

"I think they deserved to be in front at half time, and second half I thought Hennessey was excellent and deserved his man of the match.

"In the Championship the blue sky doesn't exist every weekend, there are dark clouds and there will be difficult days ahead with ups and downs, bumps and bruises."

Shots on Target
Home7
Away13