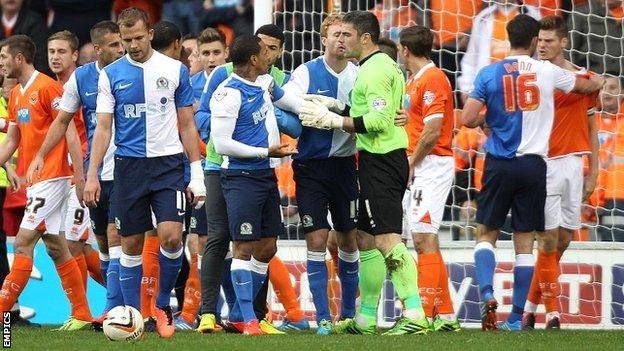 Steve Davies's late own-goal earned Blackburn a point against Blackpool as both sides were reduced to 10 men in a fiery Lancashire derby.

The game was marred late on when Blackburn's DJ Campbell and Blackpool's Jack Robinson saw red after a melee.

These Lancashire rivals have only met each other five times in the last 32 years with Rovers have only winning two of their 24 league trips to Bloomfield Road.

A point for Gary Bowyer's side prevented them from falling to their third consecutive defeats.

And although the late equaliser denied Blackpool the win, they moved into fourth in the Championship table and extended their unbeaten run to six games.

The Seasiders took a deserved lead when Ricardo Fuller was pulled down in the box by Matt Kilgallon and Ince stepped up to coolly slot away a 13th-minute penalty for his sixth goal of the season.

Rovers drew level through top-scorer Rhodes with a penalty of their own on 21 minutes, coolly finishing after Robinson's handball for his 10th goal of the campaign.

Robinson nearly made amends for his error immediately but saw his 26th-minute header from Ince's cross cleared off the line by Scott Dann.

Against the run of play, Gosling handed the Tangerines back the lead when, six minutes before the break, his 25-yard effort found a way past Jake Kean into the bottom corner.

But the hosts improved after the break with Stephen Dobbie unlucky not to get on the scoresheet after his low 53rd minute effort from just outside the area fizzed inches past Kean's post.

Ince nearly made sure of the win with an 80th-minute volley after Campbell almost set up Tom Cairney.

But ex-Blackpool striker Campbell caused the 83rd-minute scrap between the two sides after going in for a heavy challenge on Seasiders goalkeeper Matthew Gilks.

Campbell and Robinson were sent off for their reactions before Davies made his unintended mark on the game.

"We're obviously extremely disappointed to lose the goal in the last minute as we had the game under control and restricted them to long-throws into the box.

"It's a local derby and we started really bright. Unfortunately we couldn't capitalise on it and we allowed them to get back into it.

"My initial reaction was it was a dangerous tackle from DJ (Campbell) and he went in two-footed and it was dangerous. It without a doubt felt like a loss - I'm frustrated and it's always a sore one to concede an own goal."

"It had everything. I think in the end we're going away with a point we thoroughly deserved.

"DJ was entitled to go for it but it's the reaction of the Blackpool players after that caused two players to be dismissed from the field. Gilks and DJ are mates so DJ is not going to hurt one of his mates - it's the reaction afterwards."