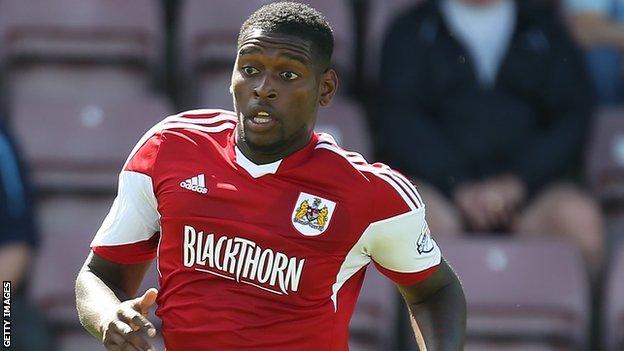 But Sean O'Driscoll's side hit back with two goals inside a minute from top scorer Emmanuel-Thomas, and Scott Wagstaff's volley made it 3-1.

Liam Noble's powerful drive pulled one back for the hosts but the ex-Arsenal forward fired in his third to earn City their first three points since 9 March.

Bristol City's wait for a win

Bristol City's last league win came on 9 March against Middlesbrough, when they were still a Championship club

But it was the hosts who took the lead when influential defender O'Hanlon thumped home a towering header from James Berrett's corner.

However, Emmanuel-Thomas inspired a sensational comeback after the break.

His first goal was a free header from eight yards after Brendan Moloney's ball in and some good work from Bobby Reid set up the forward to lash home his second.

Wagstaff chested the ball down and volleyed in to increase their lead, but Noble gave City a scare when he found the bottom corner through a packed penalty area.

But Emmanuel-Thomas slammed a left-footed shot into the Carlisle net from 12 yards to make sure of the much-needed victory.

"It's a great afternoon for everyone - the players, the staff and fans. I hope this is the start of a good run for us.

"It's got more difficult the longer it's gone on. We've just had to wait for that one game to click.

"Now the pressure has gone and we can get back to playing how we want to.

"That's my first senior hat-trick so it's a very pleasant day for me."