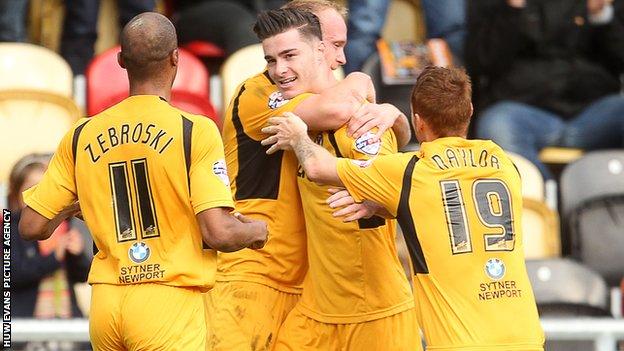 Newport County moved up to seventh place in League Two with a comfortable victory against Southend.

Conor Washington's shot give the Exiles the lead before Southend replied with a superb Ben Coker free-kick.

Defender Andrew Hughes, who returned to action after missing two games with a hamstring problem, then scored a header to make it 2-1 to County at half-time.

Ismail Yakubu headed home Washington's pinpoint cross to seal the win early in the second half.

"That was the best win for sure [this season]. From start to finish we were excellent and thoroughly deserved our three points against a very good team.

"Conor Washington deserved his goal, his performances of late have been phenomenal really if you think where he's come from in a short space of time.

"We're going to be a stronger outfit as the season goes along because we've got a lot of players missing, but what it has given is players opportunities that they didn't think they'd have and they've excelled."

"Not the result or the performance [we wanted]. The pitch did cut up and Newport played the conditions better than we did.

"We beat ourselves to be brutally honest, we've gifted them two goals - the timing of the second goal has unhinged us.

"Too many players had off-days with the ball. We've created one or two chances, but at the same time they've created an awful lot of openings.

"For me it was too easy to play against us today - that's been an uncharacteristic side of today's performance."