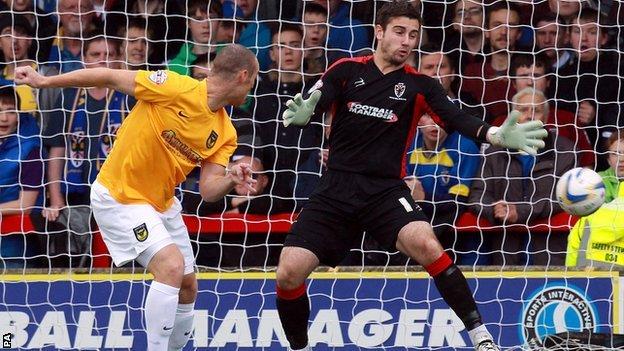 Oxford United climbed to the top of the League Two standings with victory over AFC Wimbledon.

James Constable opened the scoring after only six minutes with a header from Asa Hall's fine cross.

The hosts came close to an equaliser but George Francomb failed to get on the end of George Porter's low ball in.

Oxford made sure of the win when substitute Deane Smalley scored from the penalty spot, after he had been brought down by Rhys Weston.

AFC Wimbledon have now gone six games without a league win, while the U's, unbeaten in four, are top on goal difference ahead of Rochdale.

"It's always tough when you keep having to chase games, and five minutes in we were 1-0 down again, and that's eight games on the trot now.

"The boys have given a lot of energy at the end of a tough week and have put everything out there and if we stuck a half chance away we could have kicked on. I won't moan about the effort and energy and the buck stops with me and we will have a meeting on Tuesday and get some positivity back in the camp.

"We lacked quality at times but that comes from confidence being drained at times, at one end they were a constant menace and at the other they were solid, we need to pick ourselves up and become a better team."