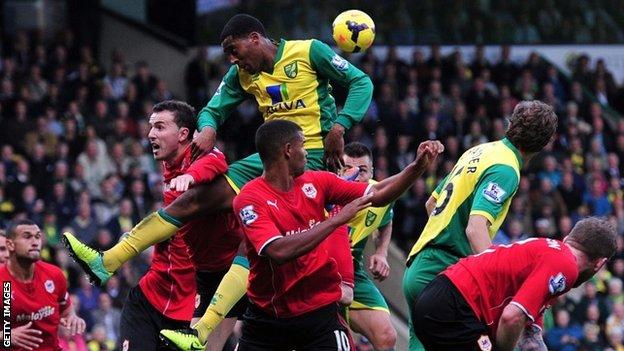 Chris Hughton's side created several opportunities but were thwarted by the Scottish goalkeeper.

The result leaves Norwich, who have won only one of their last five games, in 18th place on eight points.

Cardiff are one point better off, with manager Malky Mackay's attentions now focused on the first all-Welsh Premier League match against Swansea on 3 November.

The first half contained an incredible 16 efforts on goal, with superb last-ditch defending preventing either side from breaking the deadlock.

Former Norwich keeper Marshall came to Cardiff's rescue on a number of occasions, blocking long-range efforts from Howson and striker Hooper, who has yet to score in the league, before producing a double-save to deny the pair again just before the break.

And when Marshall found himself in no man's land from a corner, team-mate Peter Whittingham was on hand to block Leroy Fer's beautifully controlled volley on the line.

Home goalkeeper Ruddy also impressed, first when he blocked Jordon Mutch's point-blank shot with his face and then when he turned South Korean Kim Bo-Kyung's low drive around the post.

There were fewer clear-cut chances after the interval, but the second half still delivered on goalmouth action, with the majority of the action in the visitors' area.

Hooper, whose manager still believes he can force his way into the England World Cup squad, was again heavily involved.

The striker headed a foot over from six yards before Robert Snodgrass failed to make good contact on his sumptuous ball.

With five minutes remaining, Fer - who signed for the Canaries in the summer - should have opened the scoring but directed his effort straight at the keeper.

The match ended controversially when Fer kicked the ball into an empty net from a throw-in instead of passing back to Marshall after the ball had initially been kicked out of play to allow a home player to get treatment.

"Credit to Cardiff. They came here and defended very well. On the balance of chances, we should have won.

"We haven't scored, although it's not down to the lack of endeavour or the way we played. It's frustrating because it's one that should have been three points. Their keeper has had a very good day.

"As the game went on, you thought the goal was going to come. Perhaps in the end you thought one of those goals would be an own goal or come via a deflection."

"I don't think Fer actually meant to put the ball into the net. If the referee had given it then Chris [Hughton] probably would have allowed us to go up the other end and put the ball in the net.

"Regarding Norwich's efforts on goal, we knew they could shoot from distance. They had long-range strikes that David [Marshall] dealt with very well. For two-and-a-half years he's been excellent for me.

"I've pointed out to my team the importance of picking up points on the road. Today we stifled Norwich and got a clean sheet."