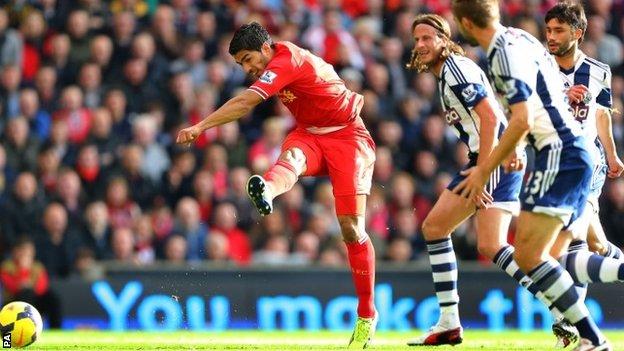 Luis Suarez scored a scintillating hat-trick as Liverpool kept the pressure on Arsenal at the top of the Premier League table with a convincing victory over West Brom at Anfield.

This was a majestic individual display by the Uruguayan striker, who left the field to a rapturous ovation and went down the tunnel with the match-ball under his arm. But it was also a day when the partnership between Suarez and Daniel Sturridge simply proved too much for the visitors.

Suarez fired Liverpool in front on 11 minutes, after a delightful, jinking run that tore the West Brom defence to shreds.

The 26-year-old added a second six minutes later, heading powerfully beyond goalkeeper Boaz Myhill, and completed his hat-trick with a glancing header from a Steven Gerrard free-kick.

James Morrison pulled a goal back for West Brom with a controversially awarded penalty but Sturridge extinguished any hopes of a comeback 15 minutes from time with a wonderful 20-yard chip. Both home strikers also hit the bar.

Suarez and Sturridge have now scored 14 goals between them in the league this season, and the Uruguayan has 36 goals in his past 46 matches for Liverpool. The only disappointment for Brendan Rodgers' side was the failure to keep a clean sheet, something they have now failed to do since 1 September.

Their concession here was down to a strange piece of officiating midway through the second half, when the assistant referee awarded West Brom a penalty for Aly Cissokho's foul on Billy Jones, despite referee Jon Moss having apparently already decided against awarding a spot-kick.

But the day belonged to Suarez, who came into this game having failed to score against West Brom in five previous appearances but clearly in no mood to be denied again.

His close control was, at times, hypnotic. He produced his full repertoire of feints and swerves, sudden stops and demoralising spurts to leave the visiting defenders dumbfounded time and again.

Frustrated to be denied a penalty after 10 minutes when he went down too easily following a coming together with Gareth McAuley, he soon put things to rights with an opening goal that was the pick of the bunch.

Gathering the ball 25 yards from goal, Suarez drifted away from Claudio Yacob, nutmegged Jonas Olsson and fired a low shot unerringly beyond Myhill and into the far corner of the net.

Next he combined with Cissokho down the Liverpool left before directing the Frenchman's cross beyond Myhill with a powerful header that hit the top corner from the edge of the penalty area.

It felt only a matter of time before Suarez completed his hat-trick as he saw a curling free-kick drift narrowly wide and a goal-bound shot blocked brilliantly by Olsson.

In fact, he had to wait until 10 minutes into the second half for his third, but he made no mistake when Gerrard's free-kick came his way, glancing a header beyond Myhill as Anfield reverberated to the sound of Suarez's name.

Even Liverpool owner John W Henry felt moved to tweet his thoughts from Boston. "Luis. Magician" was all he wrote. On this evidence, it was hard to disagree.

If Suarez had set the record straight on a personal level, this result also brought a measure of revenge for Liverpool, who had lost the past three league matches between the sides.

West Brom had come into the contest unbeaten in five games, their best run of form under Steve Clarke. Memories of their stunning victory at Old Trafford were fresh in the mind and, given the Baggies' solid defensive record, Liverpool might have expected a more taxing afternoon.

But with the calming presence of Lucas Leiva, restored to the side after the birth of his second child, alongside Gerrard and the irrepressible Jordan Henderson in midfield, Liverpool rarely looked troubled.

And while Sturridge may not get the headlines, his contribution was at times just as dazzling as Suarez's. His deft chip for Liverpool's fourth would, on another day, have been the moment of the match.

But by then Suarez had already produced more than enough magic to see West Brom off.

"It was a difficult afternoon. We set ourselves up to be open, but maybe we were a little bit too open. The first goal is disappointing to lose and the second goal is an unbelievable header from the edge of the box.

"We kept going - you can't fault the effort - but we gave ourselves too big a mountain to climb. We created a number of chances. It was an open game - probably great for the Liverpool fans to watch. At the moment their two boys up front are in form and we suffered for that."