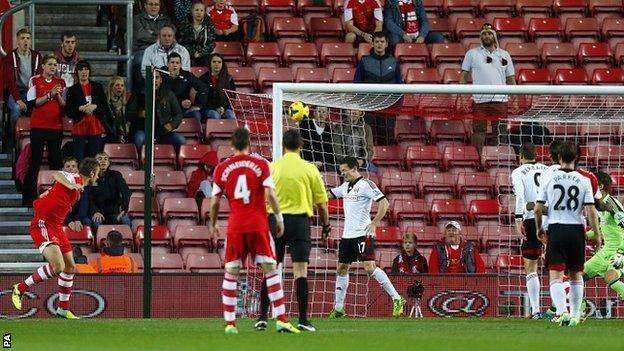 Southampton climbed to third in the Premier League table with a comprehensive victory over Fulham.

Saints dominated from the start and took the lead when Jay Rodriguez flicked on a James Ward-Prowse corner for Rickie Lambert to head home.

More chances followed and Lambert hit the post from 25 yards before setting up Rodriguez to make it 2-0, turning an Adam Lallana cross into his path.

Southampton's high-tempo pressing game hardly allowed the visitors so much as a sniff in front of goal as Mauricio Pochettino's side secured their sixth clean sheet in nine games.

That came after Fulham midfielder Scott Parker told Dimitar Berbatov to mark the England striker from James Ward-Prowse's corner, only for the Bulgarian to stand and watch the ball fly over his head for Lambert to nod in unopposed at the far post.

Southampton, who were constantly sending their full-backs Nathaniel Clyne and Luke Shaw on raids up either flank, had already gone close when Morgan Schneiderlin's shot was cleared off the line after Sascha Riether was caught in possession.

Fulham, meanwhile, were struggling to even get out of their own half and, with Southampton pouring forward, more chances followed for the home side.

Fulham's poor attacking display at St Mary's saw them become the first side to fail to manage a shot on goal in the first half of a Premier League match this season. The Cottagers did manage two efforts after the break, however.

Rodriguez was denied by Maarten Stekelenburg after surging clear, Victor Wanyama sent a low shot skidding wide and Lambert fizzed another effort against the post.

Lambert should have done better with his header after escaping Philippe Senderos to get on the end of another ball into the box, bringing a routine low save, but another Southampton goal was not far away.

Two minutes before half-time, Lallana lifted the ball to the back post, where Lambert deftly nodded it back across goal for Rodriguez to head home from close range.

Fulham had arrived on the south coast on the back of a mini-revival that had seen them win their last two games, with Pajtim Kasami scoring a potential goal of the season against Crystal Palace in the process.

Kasami did not even get within shooting distance this time, however, as his side continued to be outplayed after the break.

Southampton kept pressing, and also kept passing as they picked Fulham apart. The only thing missing was a third goal, although Rodriguez almost obliged with an acrobatic effort which flashed wide from Ward-Prowse's cross.

The destination of the three points was still never in doubt, and the only question left was whether Fulham would even manage a shot on goal.

Saints keeper Artur Boruc was finally called into action after 75 minutes, but only to deal with Dejan Lovren's attempted clearance from Fernando Amorebieta's cross.

The Cottagers finally managed an effort themselves with eight minutes left, when a corner was not properly cleared and Sidwell hooked the dropping ball wide.

Southampton manager Mauricio Pochettino: "It's all about the players in the dressing room, they fully deserve the plaudits. I just want to congratulate them for the amazing effort.

"I don't know how far we can go, it's more about the satisfaction about the getting the win and playing well. There are things we need to improve and we want to continue working hard."

Fulham boss Martin Jol: "Southampton are very strong, athletic, aggressive and you have to match them and if you don't you will lose these games.

"The most disappointing thing for me was that we couldn't create anything ourselves.

"You have to be tough, pick yourself up. We couldn't get a break, we couldn't score a goal, they were the better team and that's not what you want."