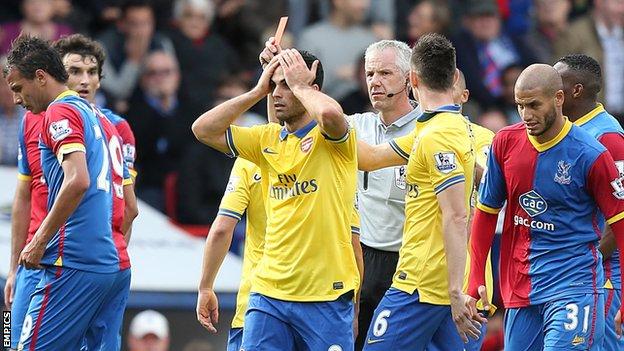 Arsenal beat managerless Crystal Palace to stay top of the Premier League, despite having Mikel Arteta sent off.

Arteta scored a penalty after Adlene Guedioura's foul on Serge Gnabry before his 65th minute dismissal for a professional foul on Marouane Chamakh.

Olivier Giroud secured Arsenal's win when he headed in late on.

The Gunners, on the back of their first defeat in 12 games after losing to Borussia Dortmund on Tuesday, were not at their best but secured a seventh league win in nine outings this season.

Palace were playing their first game since the midweek departure of Ian Holloway as manager and, even though they produced a hard-working performance, they suffered an eighth defeat in nine Premier League games.

Caretaker manager Keith Millen wanted a reaction from his second-from-bottom side after Holloway's departure and the Eagles looked much more solid at the back in the first half.

Arsenal striker Giroud sent an early header over but, despite the visitors dominating possession, their attacks were easily dealt with.

The Gunners appealed for a penalty because of a Damien Delaney handball, although it was more a case of ball to hand with a low cross hitting the Palace defender while he was on the ground.

"Arsenal have had a fantastic start to the season. Today was a tired, laboured performance. Against a Newcastle, Southampton or Swansea, they would not have gotten away with it. Crystal Palace never offered a consistent goal threat."

The vocal home support did their best to help their team and nearly had a reason to celebrate only for ex-Arsenal forward Chamakh and Guedioura to have long range strikes saved by Szczesny.

There was a lively end to the first half as Palace midfielder Kagisho Dikgacoi headed wide of the Arsenal goal while, at the other end, Santi Cazorla flashed a shot past the post and Aaron Ramsey had an angled effort saved by Palace keeper Julian Speroni.

Arsenal were denied a penalty when Gnabry, who had come on for the injured Mathieu Flamini, appeared to be caught just inside the area by Delaney - but the visitors did get a spot-kick early in the second half.

Guedioura lost his discipline when diving in on Gnabry, and Arteta converted the resulting penalty as Arsenal scored for a 14th top-flight game in succession.

Palace regrouped and were given added hope when Arteta was red-carded for a professional foul on Chamakh. The Spaniard was the last man when he felled the Eagles forward but will have felt the dismissal was harsh considering it was about 40 yards from goal.

The home side almost compounded Arsenal's feeling of injustice when Joel Ward's well-struck shot was tipped against the crossbar by Szczesny, who pulled off an even better save in palming over Jedinak's 20-yard volley.

Palace continued to press for an equaliser but were caught out when Giroud nodded in Ramsey's cross from close range, with Arsenal now unbeaten in 14 competitive away games.

"I thought our organisation was terrific in the first half. We grew into the game and had a couple of half chances.

"At half-time we told the lads to make sure we start sharply after the break. Unfortunately, we gave away a soft penalty. All our hard work was undone within two minutes of the restart but the response from the players was the most pleasing factor for me.

"The two saves the keeper has pulled off [from Joel Ward and Mile Jedinak] were world class and that is the little bit of luck we are not having.

"I think it was a red card because we had two players who were going to be through on goal. Unfortunately, we didn't capitalise.

"It is the kind of game where you need the points. We were resilient and unlucky to be down to 10 men. We needed to be patient and did that well.

"The sending off was a wrong decision because it has to be a clear goalscoring opportunity. He was a long way from goal.

"It has to be the last man and that is not proven to me. Also the foul was not obvious."