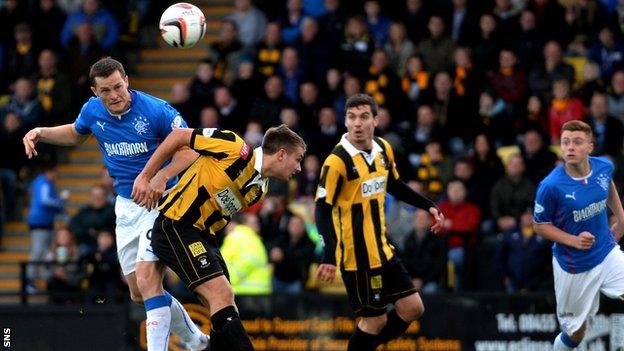 Jon Daly scored a hat-trick as Rangers extended their sequence of Scottish League One wins to 10 with victory against East Fife at Bayview.

The visitors had the ball in the net in the first half but a foul on goalkeeper Greg Paterson meant no goal was awarded.

However, Gary Thom's own goal put Rangers ahead early in the second half.

And two headers followed by a strike from Daly secured a comfortable win for the league leaders.

Ally McCoist's side are 11 points clear of both Ayr United and Dunfermline.

Bilel Mohsni and Nicky Clark threatened for Rangers and the Fifers' captain Craig Johnstone also came close before Ian Black had a goal disallowed for Daly's foul on Paterson.

Thom's attempted clearance diverted Lee Wallace's cross into the net early in the second half and from there Rangers took control.

And Lewis Macleod cut the ball back for Daly to net again midway through the second half.