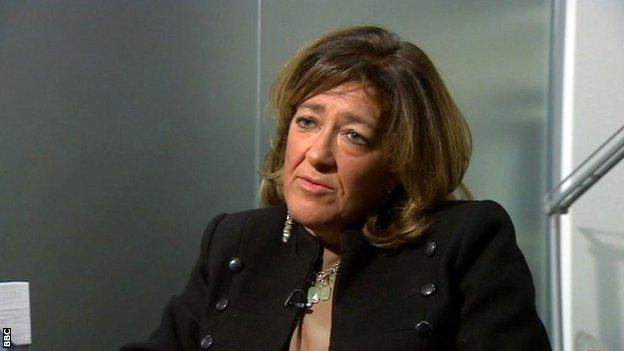 The Football Association has been accused of letting down black and ethnic minority people after setting up an all-white, all-male commission to improve the England team.

The FA's only female board member Heather Rabbatts said she had no choice but to go public with her concerns as there had been a "refusal to understand" her position in private.

By breaking ranks Heather Rabbatts has delivered the most damaging blow yet to FA chairman Greg Dyke's commission on the state of the English national team.

In a damning letter to fellow board members, Rabbatts complains that she and other directors were not consulted before the first appointments to the commission were announced.

But, perhaps more significantly, she says the current make-up of the commission does not reflect black and ethnic minorities and says in its present form it is unsustainable.

Having made the FA commission one of the major themes of his chairmanship, Dyke is now under huge pressure after just four months in the job.

Rabbatts said: "The opportunity to lead an informed debate on the future of English players has been singularly damaged."

The new sports minister Helen Grant, who is also equalities minister, says she will speak to the Football Association next week to express her concerns about the commission.

"Sports governing bodies must reflect the make-up of the diverse society that we live in," she said. "I expect the FA to ensure that voices from all backgrounds are heard loud and clear and contribute to this important piece of work to help strengthen English football. I will discuss the issue with the FA next week."

Jamaican-born Rabbatts, 57, wrote to Dyke and fellow board members to criticise the commission.

"I've come to the conclusion the FA's current position is not sustainable," said Rabbatts, who is of mixed race.

"By proceeding along this current path we are not only failing to reflect our national game but we are also letting down so many black and ethnic minority people - players, ex-players, coaches and volunteers, who have so much to offer and are so often discouraged and disheartened by the attitudes they encounter.

"The FA should be leading by example, not reinforcing entrenched attitudes.

The FA says the commission's make-up is not necessarily complete, and that other people will also be consulted. Dyke has said it will consist of no more than 10 members.

The group will consider how to increase the number of England-qualified players appearing for the country's top clubs. In September, Dyke set England targets of reaching the Euro 2020 semi-finals and winning the World Cup in 2022.

Rabbatts said: "I have tried every means at my disposal to stress the importance of diversity for the effective work of the commission and to express my concerns in private," she added.

"The key is not to consult when it suits but to involve the right people from the outset at the decision making table."

She also suggested that it was "ironic" there were no representatives from the black and ethnic minority communities - at a time when Andros Townsend helped England secure World Cup qualification.

"While England's victories on Friday and Tuesday are due to many factors no one would argue that a young black player made a huge difference and a young man whose father has played a significant role in fighting racism in football," Rabbatts said.

However, Rabbatts did back the FA's support for England boss Roy Hodgson after his dressing room joke about a monkey in space, but added: "As the commission looks to address all of the complexities of its brief, it will crucially have to come to a view on nationality, race and identity.

"To have announced a list without anyone who can speak from experience and in an informed manner on those three areas has exposed the FA at a vital moment.

"What is required is not tokenism but the involvement of individuals who have direct and relevant experience of what it means to represent their country while coming from diverse cultural backgrounds."

In response to Rabbatts's comments, Piara Powar, executive director of European anti-racism body Fare and a member of Fifa's new anti-racism taskforce, said: "Heather Rabbatts is first woman and only ethnic minority on FA Board. She has ideas, experience and nous. But seems to have been ignored. Why?"

Kick It Out chairman Lord Ouseley said he had raised the issue of the commission with Dyke, and questioned why he had not used Rabbatts' contacts and experience to bring on a suitable representative.

"This has been a disaster for the FA in public relations terms. Heather must have been at her wits' end to go public like this," he said.

"I find it very surprising therefore that someone as close to the chairman as Heather Rabbatts, with all her experience and contacts, was not asked for her advice on ensuring diversity."

Last week former England defender Sol Campbell was the first name to publicly criticise the diversity of the group. In a BBC Sport interview he said "it seems like that's overlooked all the time".

It is understood the FA has spoken to members of black and minority ethnic communities about joining the commission, but many of those approached have not been able to commit the required time.

The Premier League says it will help the commission, but has so far rejected the chance to have an official representative on the panel.

Former England captain Gary Lineker also criticised the commission when he said most members were "utterly pointless" earlier this month.