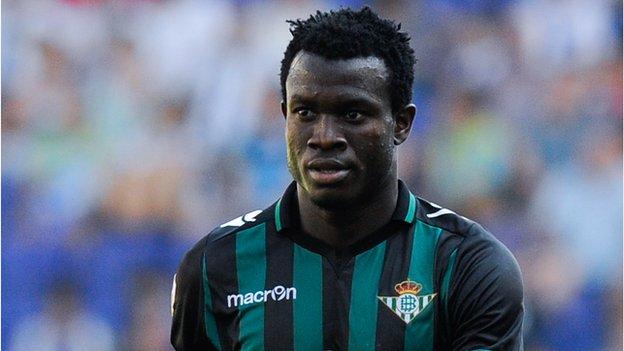 The Ethiopian Football Federation (EFF) has denied that there was an attack on the Nigerian team in Addis Ababa after their World Cup play-off first-leg tie.

The Nigeria Football Federation (NFF) said the team bus was attacked by Ethiopian fans and that midfielder Nosa Igiebor was injured.

The Super Eagles, who won the match 2-1, have reported the incident to Fifa.

But the Ethiopian FA says an investigation led to no proof of the incident taking place.

"There was no one injured - either players or individuals from the Nigerian team on Sunday. This is what we found out from our investigation.

"We have checked everything. We've got nothing that shows that a player or any other individual was injured by fans.

"The Ethiopian people are known to be respectful to any African from every corner. This is our culture, this is our history and the Nigerians are our African brothers," he said.

Basha, however, acknowledged that there were some angry fans, following a late penalty, which was converted by Nigeria's Emmanuel Emenike.

"Of course the stadium was full of angry fans, who were disappointed by the referee's decision, especially after he ruled out the first goal."

The Walya Antelopes thought they had opened the scoring after 24 minutes through Saladin Said, only for Godfrey Oboabona to clear off the line.

The NFF said in a press statement that fans attacked the team bus with stones after the match, and that the rear window of the bus was shattered.

"Igiebor was the unlucky one as the stone slashed his right palm leading to profuse bleeding that was immediately attended to by team doctor, Ibrahim Gyaran," Ben Alaiya, the Super Eagles press officer, said.

The Ethiopian FA was fined last January after travelling Ethiopian fans at the Africa Cup of Nations in South Africa threw bottles at Zambian players.

The East Africans travel to Calabar on 16 November for the return leg of the play-off, with the winners progressing to the World Cup finals in Brazil.