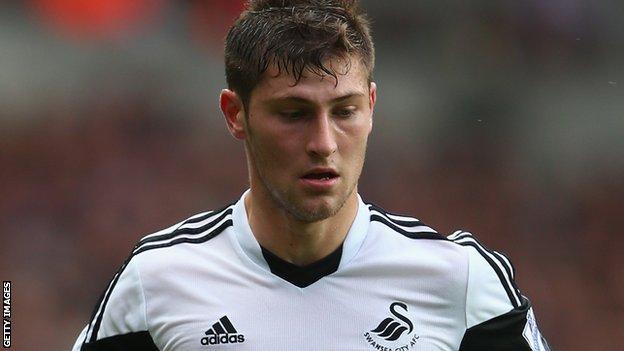 Ben Davies is expected to be out of action for three to four weeks with an an ankle injury.

The 20-year-old came off in the second half of the 4-0 win over Sunderland after twisting his ankle.

Davies definitely misses the Europa League match against Kuban Krasnodar on Thursday and the Welsh derby against Cardiff City on 3 November.

"It's another ankle injury, we have already had a few," manager Michael Laudrup said.

"It is a twisted ankle, he fell in the first half so we agreed to let him start the second half but after two or three minutes you could see it wasn't good.

Davies missed Wales' World Cup qualifiers against Macedonia and Belgium after suffering a hamstring injury in Swansea's 2-0 defeat at Southampton.

Swansea captain Ashley Williams is also currently sidelined with an ankle injury and Laudrup is not prepared to rush the defender back.

Williams was again missing as Swansea secured their first Premier League home win of the season with an emphatic 4-0 win against bottom side Sunderland.

After a goalless first half an own goal by Phil Bardsley, Jonathan de Guzman's strike, a penalty from Wilfried Bony and a Steven Fletcher own goal secured Swansea's first league win at the Liberty Stadium since March.

"In the Premier League it has been a while since we won at home," Laudrup said.

"We have won all three of our home games in the Europa League, but this is our first of the league season.

"But when people start to talk it is good to turn it down immediately, and the only way to do that is by winning."