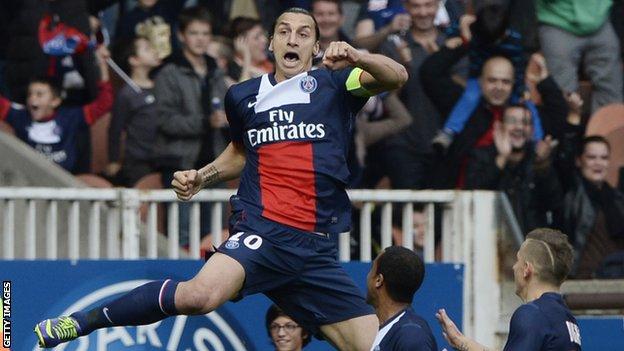 Zlatan Ibrahimovic scored two goals as Paris Saint-Germain returned to the top of Ligue 1 with a 4-0 win over Bastia.

Laurent Blanc's side had started the day behind Monaco in the table.

But Sweden striker Ibrahimovic twice found the net in the opening 13 minutes - including a sublime back-heel effort - to give the hosts a commanding lead.

Edinson Cavani added a third goal before the 26-year-old Uruguay international completed the scoring with an 89th-minute penalty.

Paris Saint-Germain are three points clear of Monaco, who could return to the top of the table on goal difference if they win away at Sochaux on Sunday.

Ibrahimovic, 32, had been a doubt after injuring his thigh during last Friday's World Cup qualifier against Austria and then missed Tuesday's 5-3 loss to Germany.

But he was an influential presence and has now scored six times in his last four appearances for club and country.

Lille are third in the table after a 1-0 away win at Montpellier, while former Liverpool forward Anthony Le Tallec scored in Valenciennes's 2-2 draw at Rennes.