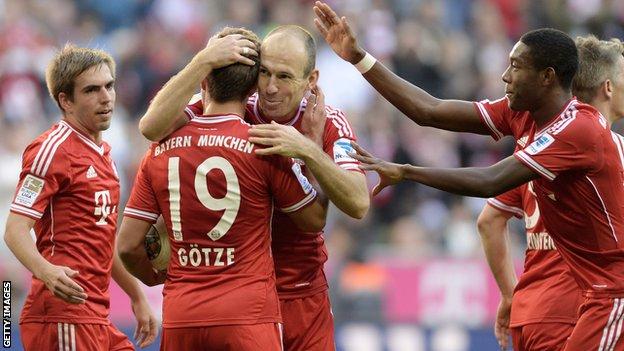 Bayern Munich scored four times in the second half as Pep Guardiola's side came from behind to beat Mainz 4-1 and return to the top of the Bundesliga.

Bayern fans were still celebrating the equaliser when Thomas Muller made it 2-1 in the 52nd minute, Mario Mandzukic adding a third in the 69th minute.

Bayern close in on record

Muller scored a late penalty after Bastian Schweinsteiger was pushed.

Pep Guardiola's seventh win in nine league games gives them a one point lead over Bayer Leverkusen, who started the day top of the table after their controversial win over Hoffenheim on Friday.

Hoffenheim are set to protest against a freak goal awarded to Leverkusen when Stefan Kiessling headed the ball through a hole in the side of the net.

Referee Felix Brych failed to spot that Kiessling's header flew wide of the post in the 70th minute of Leverkusen's 2-1 win.

Leverkusen are joined on 22 points by Borussia Dortmund, who won 1-0 at home to Hannover.

The winning goal for Dortmund, who are away to Premier League leaders Arsenal in the Champions League on Tuesday, came from a fourth minute penalty by Germany winger Marco Reus.

It was awarded after Japan defender Hiroki Sakai fouled left-back Erik Durm in the area.

Schalke, who host Chelsea in the Champions League on Tuesday, won 3-2 at Eintracht Braunschweig thanks to a 91st-minute winner from Roman Neustaedter.