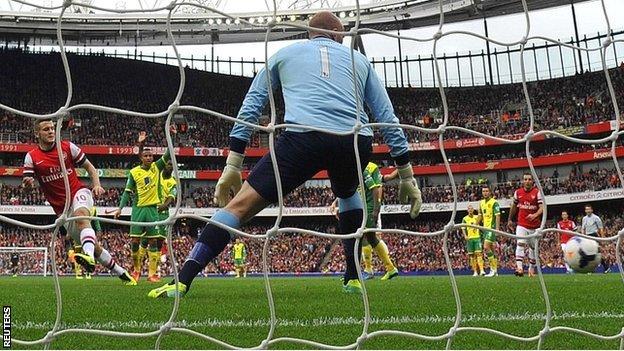 Manager Arsene Wenger said Jack Wilshere's opening strike in the 4-1 win over Norwich was one of the best Arsenal goals he has seen.

Wilshere stroked in after a controlled exchange with Olivier Giroud and Santi Cazorla on the edge of the area.

"All the goals were great, but the first was exceptional and improvised," said Wenger.

"It was certainly one of the best [Arsenal] goals, one I enjoyed the most because it was a team goal."

Midfielder Wilshere, 21, was the creator, picking up the ball in his own half and feeding Cazorla on the left, before exchanging flicks with Giroud and calmly volleying in from close range.

It was the first time he has scored a Premier League goal at the Emirates Stadium and it helped extend Arsenal's lead at the top of the Premier League table, with Chelsea and Liverpool now two points behind them.

The goal comes after question marks over Wilshere's form and criticism from Wenger for being pictured smoking in public.

Wenger added: "It had combinations and speed which you would always like your team to play with. This one was a mixture of technical quality, speedy thinking, quick reaction and as well being calm in front of goal.

"It had nearly everything you want to have, it was a great goal."

Mesut Ozil also scored either side of another superb individual strike by Aaron Ramsey, when the Welshman waltzed around the Norwich defence to score his ninth goal in 12 appearances this season.

Ramsey started the game on the bench but replaced Mathieu Flamini in the first half after the French midfielder suffered double vision as a result of clashing heads with Norwich midfielder Alexander Tettey.

The result sets up the Gunners for a tricky Champions League game against last season's finalists, Borussia Dortmund, on Tuesday. Arsenal top Group F after victories over Napoli and Marseille.

November promises to be an important month for Wenger as his side face the German side twice, Chelsea in the League Cup, plus Liverpool and Manchester United in the Premier League.

"We play seven games in 23 days, and that means we will need everybody," said Wenger.

"It gives me an opportunity as well to give the players a little breather before they will get injured.

"I like the solidarity level we have in the team, and of course we know we have quality, but it's now how much we sustain that effort to play together at that level. That will decide our future."